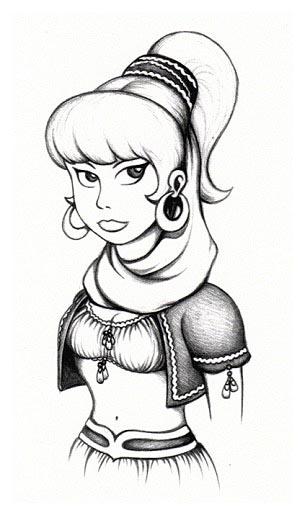 ...and now for something completley different.

Since I'm working on a story for the Comicbook Artists guild's ‘ICONIC’ Anthology, I thought I'd upload an older illo from my Manga days just for the hell of it. I see lots of Manga inspired comics here on DD and that's cool but, It's gotta be from Japan if it's truly ‘Manga’. I've never seen an American get it right. You know what they said to American soldiers going to Britain during WWII, “They don't know how to make Coffee, you don't know how to make Tea”. I guess that applies to comics as well.

Hum, Genie. You draw so well! Everytime I start to draw it's like this, "Hmm, this is actually looking pretty good! Is something wrong with me?" Then I mess up an eyeball or something else important and it all goes to... heck... I'm done complaining now. You draw beautifully and have wonderful dialogue! bye bye

OO very nice, but even for a manga-inspired drawing I can't help but see it as very Western. At first glance it reminds me of some of the Hanna Barbera stuff with a little bit of Disney...I wouldn't have guessed it was manga-inspired unless you told me though! Most people fail to realize that it's more of a story-telling style that separates Japanese Manga from its American and European counterparts, not the size of the eyes and the hair your characters are sporting. Don't let the amount of teeny-bopper manga here embitter and jade you toward the whole genre though, there's still some originality out there in the people that don't just draw what they think will get a fast audience by copying every dewy-eyed effeminate character from their favorite how-to books. I personally get mad when people label my stuff manga, it just seems like a very narrow-minded thing to say when my artistic influences are all Western animators. It is apparent that all you need is shiny eyes and people start pointing the manga stick at you! (and they conveniently forget that Disney and Fleischer were what pretty much what started it all for manga's influences... but straight up copying Disney style is being original, dontcha know!) But then on the other hand, we have awful stuff like X-Men Ronin. That is where I truly draw the line! Horrible writing, and I just did not need to see Wolverine as a cyber-ninja. Committee-thinking Amerimanga can be a truly awful sight to behold. Anyway I didn't mean to rant here, just saying I see where you're coming from but as one of those people that gets "labeled" it's become somewhat of a sore spot! Nothing is worse than honing a style for years even before you knew what "manga" was and then getting that thrown into your face, and being accused of lacking originality and whatnot while people put blatant copycats on pedestals because they rip off Don Bluth like an expert. (I am bitter too, see!) PS: I like your art a lot! Keep doing your thing, I'm certain a lot of people will take notice eventually. You have a real talent with the inks here. PPS: when will the "to be continued" parts continue? they have piqued my interest...I do enjoy a good backstory!