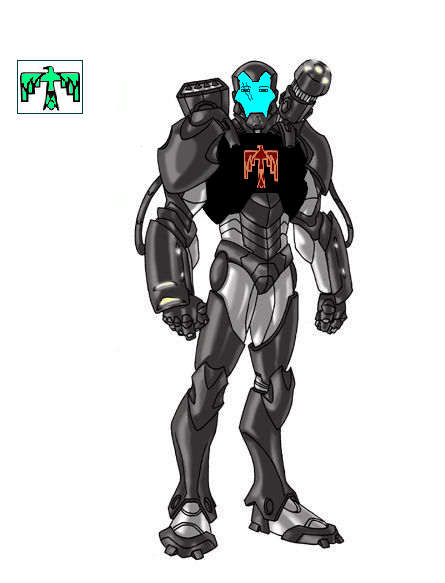 FIRST ENTRY! HUZZAH! Anyways, The September Challenge was to draw one of your heroes along with their name, and brief description of them So here is Thunderbird by CPDX. A hero who fights in an advanced power armor suit.
if you want to send in an entry you can PQ me or post it on the forum http://www.drunkduck.com/forum/topic/174588/ there.

Origin:
Blitz was a US Navy Seal Team Six member playing tourist for a few days (while on leave) at the Nazca lines in Peru flying a small rental plane when a collosal thunderstorm appeared out of nowhere trapping his plane in the vortex. Desperately trying to doge hundreds of lightning bolts shooting towards his plane Blitz collided with a massive thunder god rising form the lines in the form of the ancient Thunder Bird of legand. Awaking six months later from a coma in a CIA base he discovered that he had absorbed some of the ancient Native American God's powers and was offered a chance to be recuited by the CIA to become one of the first superhuman secret soldiers in the War on Terror. He accepted almost immediately.
Seven months went by as Blitz went on various missions across Africa and and the Middle East hunting down over a dozen terrorist cells and destroying recuitment and training camps. Meanwhile the docters and scientists that had managed to stabilize his powers and save his life while he was in the coma, created the S.S.C.S. Markak# 1 (Super Seal Combat Suit) based off the technology of the Japanese super hero SHELL but powered by the electricity from Blitz's body. Recently he has recived the permission of his CIA superiors to join the Heros Alliance on the condition he become a lison officer in their ranks to establish a working relationship between the CIA and the Heros Alliance.

Now it's even better than before

Wow It's amazing @ Macattack I believe we all would like to see your entry. By the way . . . I entered as well.

Nice! But yeah, I'd heed fukujinzuke's advice :P Macattack: Why not? If you do come out the winner every month, things might get suspicious, though.

hmmm could be good back-story

Maybe he could be a SHELL fanboy would built his own set of armour to fight crime.

oh good point jeez ,well every Shell needs a Thunderbird! so if u need me to create a back story let me know!

@cpdx You're totally welcome. I can't wait for all the other entries now... should I enter the contest I run?

Nice! You know, with SHELL's previous involvement in Heroes Unite, it's very possible that his armor's basic design schematic could've been leaked out there somewhere. So yeah, why not! Let's just... avoid any friends we may have at Marvel for a while...!