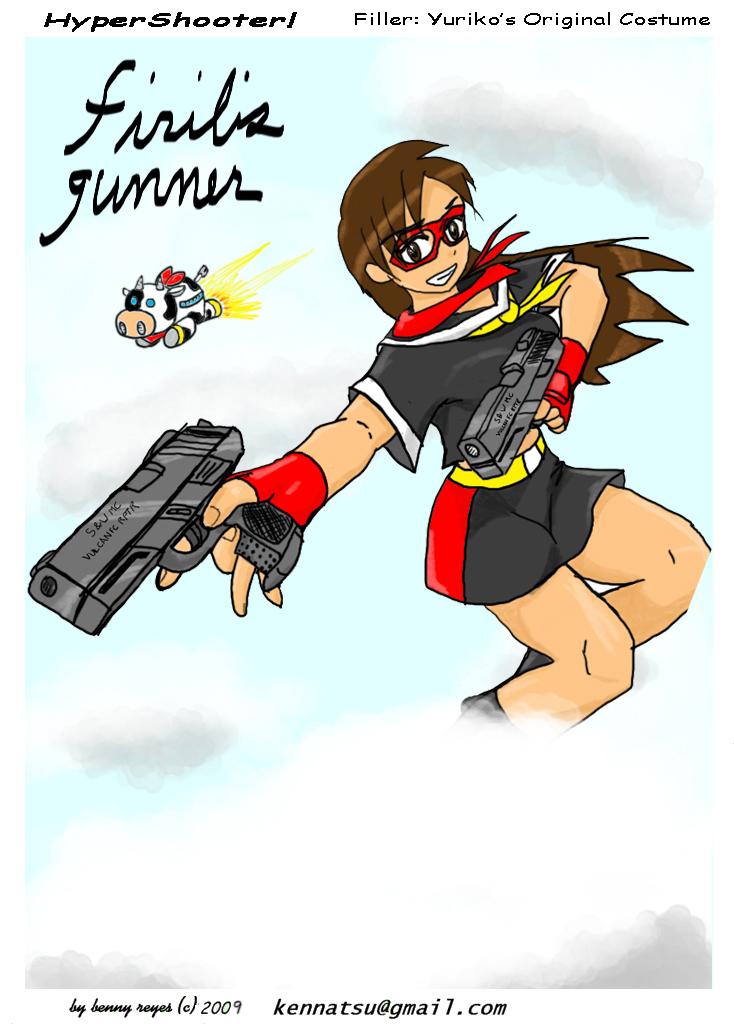 One of my lazier days. I'm just pretty tired out from some of the overtime work I get. As for the picture you see…

This is one of the prototype costumes I had for Yuriko. It was supposed to be similar to her sister's costume. Firilis Gunner and her sword wielding counterpart Firilis Blade are both characters on my City of Heroes account. Yuriko didn't begin her life as a hero in that game, however…

The idea of having Firilis Gunner as Firilis Blade's sister only came to me when I bought DarkBASIC Pro and began designing the game based on her. At first the game was to be a platformer, with Blade as the protagonist and Gunner as her enemy. Gunner was to be a girl who was passed over for the katana that Blade now wields and as a result was insanely jealous. Therefore she decides to copy Blade's look and costume.

Along the way I ran into the Touhou project, a series of shooting games done by a one man programming doujin team. After that the idea of having the two as sisters popped into my mind and then this comic shows up next.

Yuriko's sister's name is Yukiko Madison. Their names are a play on several things for me; the fact that other than their powers they are identical twins. Their hero names are a play on the way the Japanese do their naming. Firilis is their shared hero name with the “last” name denoting their specialty. Firilis Blade is a swordswoman while Firilis Gunner is good with firearms. “Firilis” is obviously a play on the word “fearless” because they will go all out in combat. Their last name “Madison” is my reference to a shooter that came out long ago for the Sega Genesis (produced by the game company Vic Tokai). Yuriko's guns are based on actual firearms. They are made by Smith and Wesson. I liked the pistols because they look well balanced. Not too large at all. Just don't go to S&W to try and order a pair of Vulcan type Molecule Flechette repeater pistols unless you want to get laughed at. :)

I switch her visor in for the mask you see here because… well… it's got something to do with her powers.

As for the flying cow in the background, that's just an Unsound of Mind reference; it's the MooCow Starship based on MooCow from the same comic. :)

Very nice. I always enjoy seeing the evolution of a character. Good perspective on the guns.

D'aww the MooCow starship looks so adorable. I'll be keeping an eye on this comic :)