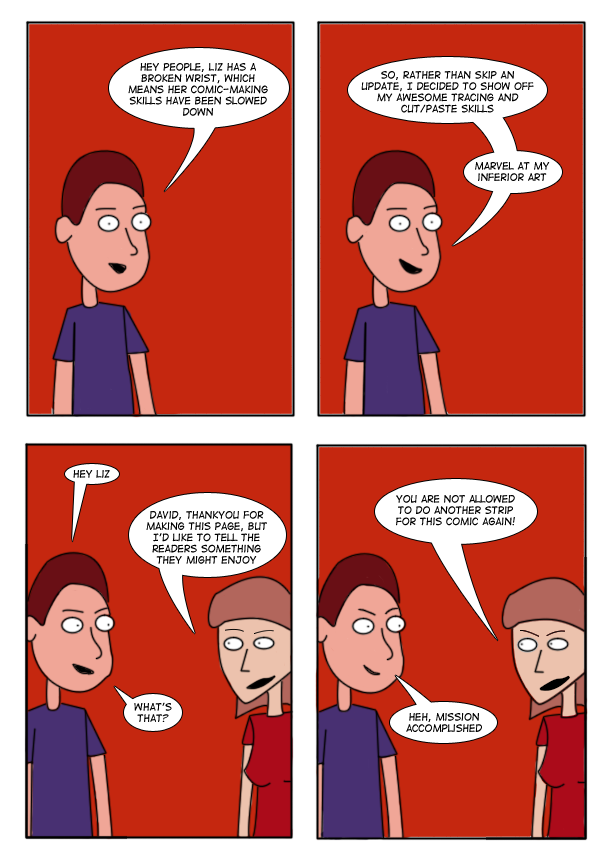 Yes, unfortunately while it was not the wrist of the hand she draws with, it still makes comicking quite hard for her. And if you're wondering, no she hasn't seen this. I only started on it an hour ago. The views expressed by Liz may not be entirely accurate when it comes to the real one.

In other news, some of you may be wondering why I just don't draw the comic myself. I'm not that bad compared to most, from what you've seen. Well just to let you know, David and Liz in this comic were traced over something I drew months ago.

See, before Insanity Complex, I drew a comic called I Felt Like It. Basically, the title said it all. It was when I updated, it was what the comics were about and all that. Anyway, for one page I was making a crack at how the most popular comics involve gaming, and so I tried to copy the main characters from Penny Arcade, VG Cats, PvP, Little Gamers, Ctrl+Alt+Delete, etc. and it worked, sort of. This was back when I drew manga by the way.

Anyway, my sister made a comment about how my copies looked really good and how a cartoony art style seemed to be more my thing. So, before I went to bed that night, I drew a boy and a girl who would become the main characters of I Felt Like It.

I woke up the next morning with all that talent seemingly gone. Try as I might, I just could not come close to the style you see above. So, I tried for something else, but nothing felt right and it all seemed forced. So, I quit IFLI and made Insanity Complex.

And that's today's lesson in the history of this comic.