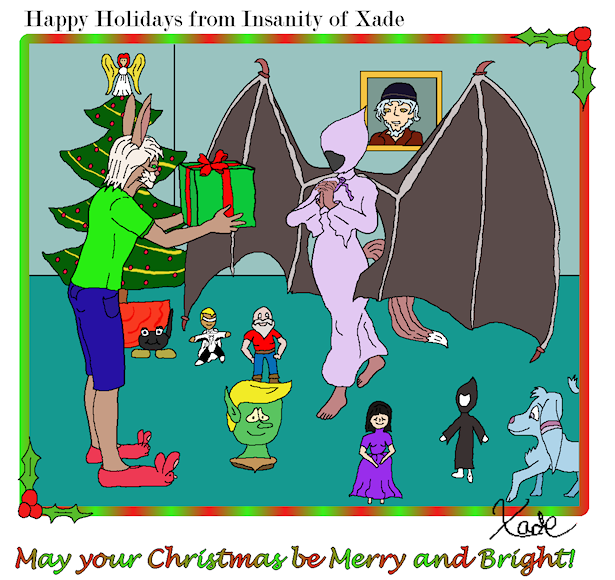 Merry Christmas gang! This was going to be my entry for the card competition of the game I play, but since I dropped out half way through it, and didn't want to waste my efforts because I had a rough draft, I thought it would make a nice little Christmas filler. Note, this is not canon.

If you look around at the toys you will see each one is a cameo. They are:

Alto the Notus, sitting under the tree from Attach This! Be sure to read my best bud's comic or I'll send Hiatus the cat after you!

Beside him is a Lightbringer plushie from The Lightbringer A nice comic who's storyline more than makes up for the artwork.

To the right is a Wheels Ironkeel action figure from Magical Misfits (I didn't feel like drawing in his special hand so lets just say the figure maker forgot about it.) Crazy plot twists abound in this well done, character filled comic.

Below Wheels is a Zortic styling head from Zortic This little parody infested comic is actually a very funny read.

The Barbie Doll is Ella from Magick The ideas are original and the story is nicely paced.

Steve the Drunken Grim Reaper doll is to her right from Life and Death If you don't know who Steve is then what rock did you climb out from under?! He's a drunk and a grim reaper, a perfect combination.

Lan the Pooka is pretending to be a dog walking on the scene, most likely trying to steal Alexis's underwear for his brother Warmwind, (who has a crush on her) from Public Humiliation Family life abounds in this pleasant and well drawn, yet rarely fully colored comic.

And last but certainly not least, the picture in the background is Nicodemus, aka Nico from Morphic An up and coming comic with jaw dropping artwork and a really good storyline.

I hope I did a good job on them all, I am not used to doing plushies and dolls and I know that tree is wonky looking but I totally flunked out on the pine tree drawing as a kid and it still haunts me to this day it seems. Maybe I can find a 3d pine tree and practice for next year. Speaking of 3d, I really need to get Alexis's wings down in a 3d program so I can work out all the bugs and have them look natural instead of weird.

PS: I am still working on the next comic, about 75 percent done, Working something new and I am ironing out the bugs.

PPS: Alex is wearing shorts because the seasons on Xade got reversed due to the alien invasion I'll explain about 3 or 4 chapters from now.

I'm surprised Alto isn't stuck to the side of that gift or something. They stick to everything.

It's OK about his arm His original one looked real so Its pre-retro arm Thank You very much!

Merry Christmas!! :D HoHoHoHo... I'm SO going to get you for this!