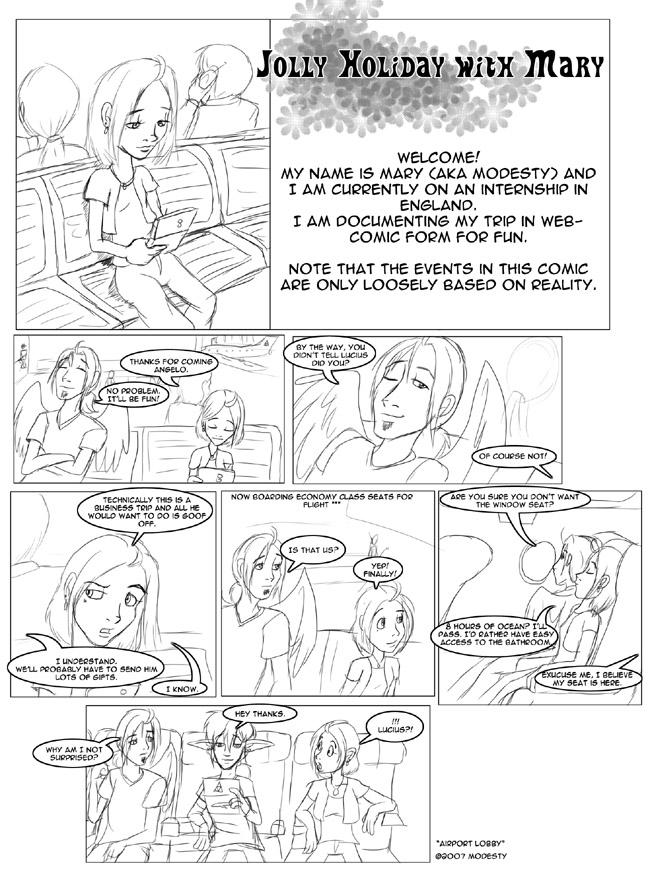 Technically I have not yet left for my trip so these first few comics will just deal with plane flights. I have taken many so…there. Bit of an intro to the characters:
We have myself (Mary), Angelo my guardian angel, and Lucius my brain-child.

Those who know me may recognize these as my signature characters. Lucius was the star of my first self-published work “Tenebrae” which was featured in the Dark Souls Anthology by Sass Studios. (Soon to be reprinted!) He's also the main character in my only completed Novel of the My Shining Knight series that I am writing. :3

Angelo is actually one of my older characters (both in concept and actual age. He's typically aged around 28). His concept was conceived back in high school…which is a long time ago for me now. (That's american high school as opposed to European high school which is different.) Angelo does not have an official story associated with him. I've used him in Roleplay games and tried to make a web-comic about him. (but failed). Right now, I'm trying to use him in a game concept which was based on my old web-comic idea…except much better now that I'm matured. I am actually quite pleased with the game story.
Typically: Mary = stubborn, task-oriented, sarcastic, often bored.
Angelo = voice of reason, calm, middle-man
Lucius = emotional, high-strung, trouble-maker, also often bored