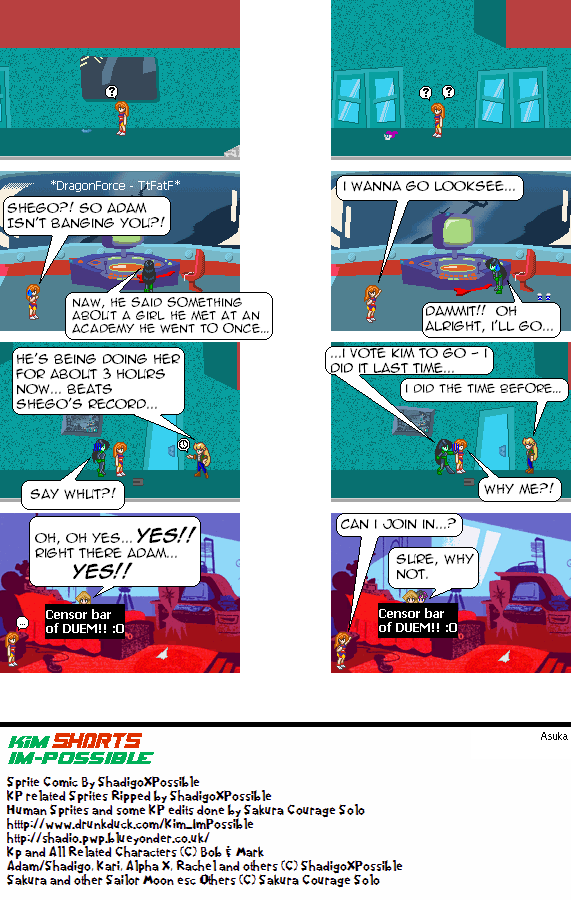 Considering what recently happened to LevLord over at dev, I was going to just put this here and be done with it… Unfortunately - i don't think anyone goes here anyway - so i guess it goes up on Dev as well… *rolls eyes*

Yes, it's another Ki-P with sex in it, no it isn't with one of the main crew… (surprisingly) and beats what was supposed to be an undisputed record… :|

You'll notice a piece of clothing in each panel of the comic… mostly from a certain female Duelist from YuGiOh GX… If you havn't noticed the title already - it's actually Asuka Tenjoin (Dub: Alexis Rhodes - I personally hate that name, not just because 4Kids picked it, but because it makes her sound like a lesbian IMO… don't ask why - i just think it does… :| )
I was never sure whether or not the blue thing on Asuka's costume was separate or not… i assumed that it was. I'm probably horribly wrong as usual… :\

Shego is playing Guitar Hero 3, hence why I mentioned Through the Fire and the Flames… Why? Because Shego with a Guitar kicks ass! she still fails at said song.. =P (note that i'm not confirming nor denying what difficulty it was on… I mean even my sister can do that song on easy and she sucks at fast songs… :lol: )

The sprite of Asuka I originally found at a Spanish-speaking forum whilst i was looking for pics… and I've seen them here on Dev recently whilst also looking for pics. They belong to Jounouchi… i think… *scratches back of head*

And notice only one pair of underwear…? Someone's been freeballing… ;) after all it makes you play better - DethKlok say so… =P