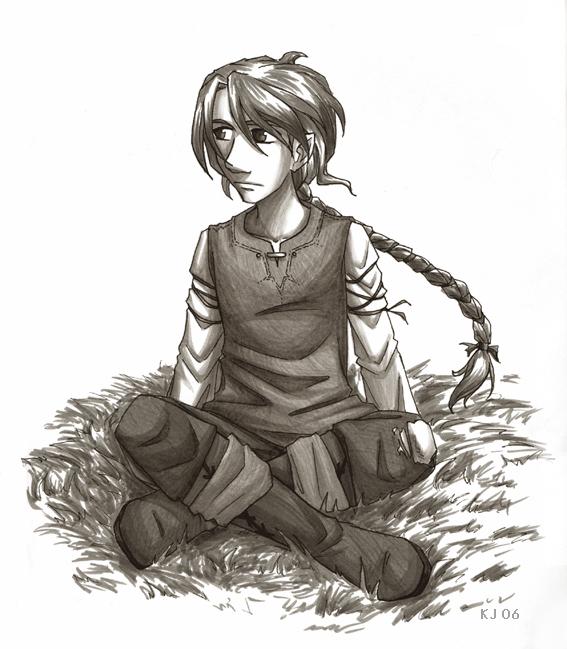 Nope, still not a page. I'm sorry about this ongoing lack of “real” updates, but between schoolwork and personal life, comics just haven't been happening. Right now I can't stand the thought of even opening my paint program.

I don't like leaving y'all with nothing, though, so there's Random Art like this! I may not feel like painting, but I like playing around with my markers. Traditional Art is scary, because I can't save/undo anything. This piece of Joi was a lot of fun, though. I hope you like it!

almost a year since the last update? not looking good :(

It's a pity this comic hasn't updated since February. It was an interesting story.

It's cute! *koddles the pic*

I miss King Of Hearts. Can't wait for another update. ^_^

Just finished reading the archives, Great comic. I will be patiently waiting for your next update.

wheres the updates i want to know what happens next

Wheee! Patience is quite handy in situations like these. Keheh

It's been five months, are you updating soon?

it looks really pretty. =) That's a good pose for Joi.

You convey the characters' thoughts (or lack therof) very well! What I mean is that we all just like to sit around and think of nothing (or everything, it's hard to tell) from time to time. It's a very pretty pic. ^^

Great work! I shall be back to read the rest of your comic...

I just Love the left knee of his

wow i really like it! :) keep up the awesome work!

hey... I found your comic through a link on Shimmer's page... I love it and have added you as a favorite ;)

Amazing work as usual. That grass looks so soft I want to sleep in it.

Beautiful traditional work. And the pose is so relaxed and life-like! :D For the win.