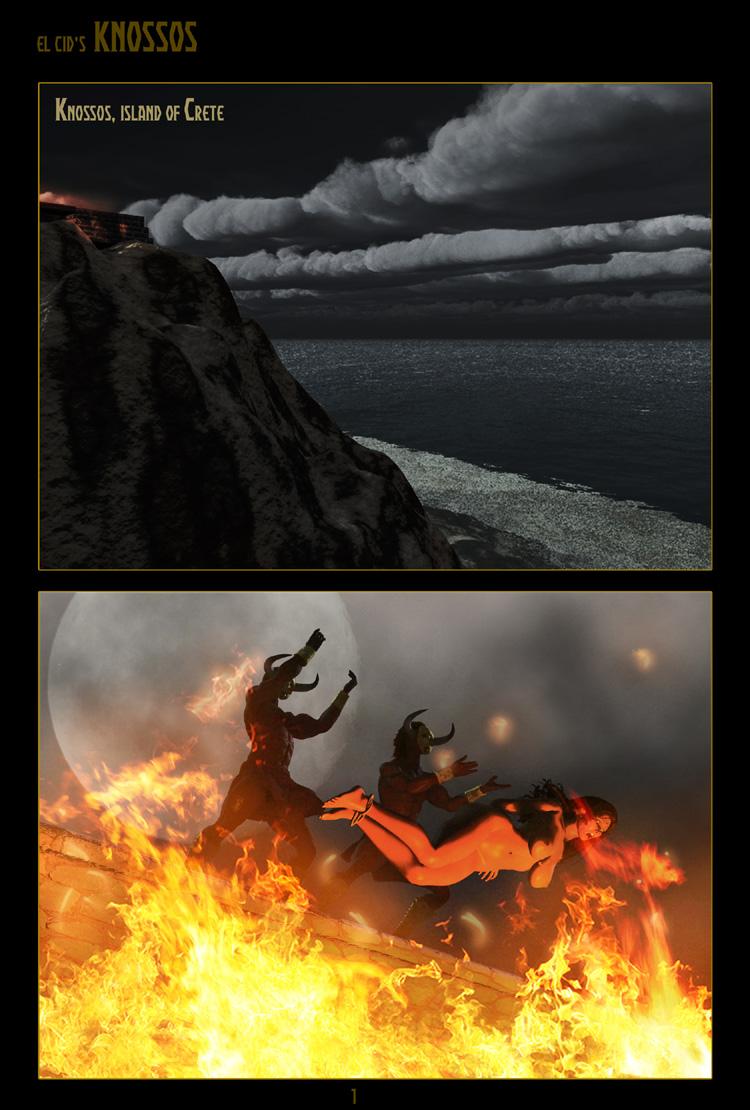 Okay, so I did get around to finishing that first page after all. And made a new thumbnail too. Yay me, pat on the back.

As I mentioned before, this isn't likely to update regularly, at least not at first, but before I get too invested in the project I do want to put out the first few pages to see if anyone's even interested in a bastardized American revision of classical Greek literature.

Ugh. I was going to update today but the site's acting stoopid again. Tune in tomorrow folks and I should have something posted then.

No prob. I just keep coming back to check out her gazongas. XD

@roy: Thanks for the "shout-out!" @houseofmuses: Thanks! I'm not sure I want to get too serious about advertising this comic just yet, because right now it's still in development. I'm just doing a brief prologue for now. Hmmm, looking back at this page, I think I might have made those boobs a little too big. Okay, a LOT too big!

@El Cid @royduncan100 Yeah, I got some cool fire, mayhem and bloodshed at Tiryns coming up in my latest book. Do an ad for it, Cid and I'll put it on my page. :)

@ hchano you're right! that lazy bastard. good help is so hard to find.

all of your work is credible. the subject matter just limits the readership. but i read all of your work cid. it's all good. with clash of titans, and 300 movies i don't think you will have any problems finding readers. i'll tell you what, next week on the tvc webchat show we are doing and up and comming talent show. i will throw out the info on this comic for the listeners.

Guy1: Destroy her, her tits are bewitched!! Guy2: We don't need that fake shit here! *both toss* Woman> BUT THEY'RE REEAAAaaaallll... Sorry, just the first thing that went through my mind lol. I like how the second guy is like...*gentle toss*. XD The other guy really seemed more into it, huh? XD

hom, i belive i wrote greek,not geek. if i did write geek it was just a typo. i know becaus i make enough of them. hahaha!

Nothing like starting off a story with a volcano sacrifice.

Whoa there she goes.

Aw, wow, the chick with the biggest boobs dies. Roy told me this was supposed to be a Geek series. Where are the Geeks?!? Your work is super. We should collaborate sometime. ;)

Nothing to worry about there. This is definitely not one of my smutty gross-out-fests. Umm... but time will tell if it actually pans out into a credible "real" comic.

i've got to tell house of muses to come get some of this.