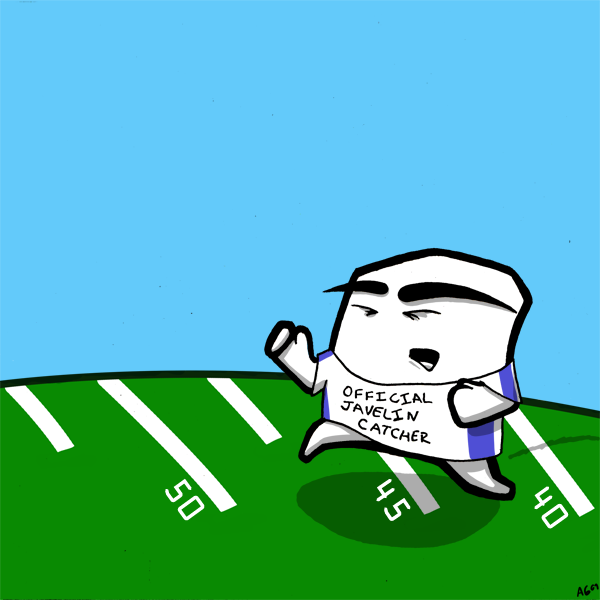 Someone has to catch it

Ok, I'm a day late due to some internet issues, but the comic is still here.

I don't have much to say about the comic itself here. It all seems rather self-explanatory to me ( However, seeing as I am a terrible judge of this, we'll see. ). So, that being said, I will have another comic next week and I hope you'll all tune in then for our next episode of sick and twisted humor. ( These words brought to you by the continued emails of The Christian Coalition of the Quad Cities. A group dedicating to providing me with the motivation to produce Last Words. )

Oh, I hope there will be more of your little square dudes, altho 2009 was awhile ago, wasn't it

I saw an actual picture of an army cadet (i forget which country) holding up a practice target. he was sitting in a chair and not looking very comfortable to be there. It was too recent to be archery, but didn't look modern. I'm guessing it was for gun practice. I'm hoping it was just a gag.

*sigh* I miss this comic.

I wouldn't do that job for a million dollers... unless there were actually goggles, then I would consider it. by the way do you know were I can get one of those shirts? lol

Probably pays less than you'd think due to the laundry bill...

Be greatful Corey. I've heard the benefits packages are terrible. It's a dying profession Stickfodder. ( Oh man, I make myself wince. ) Some fields think they can get by without someone to do it. Well, some people do it for the love seventy2. Some people are just dedicated like that. Goggles do make everything better pantsreminder. There's just something fun about them.

I'd do it if I got sweet goggles. Everything's better with goggles.

you could not pay me enough.

Man those guys must be pretty bad at their job, all the javelins I've seen have always hit the ground.