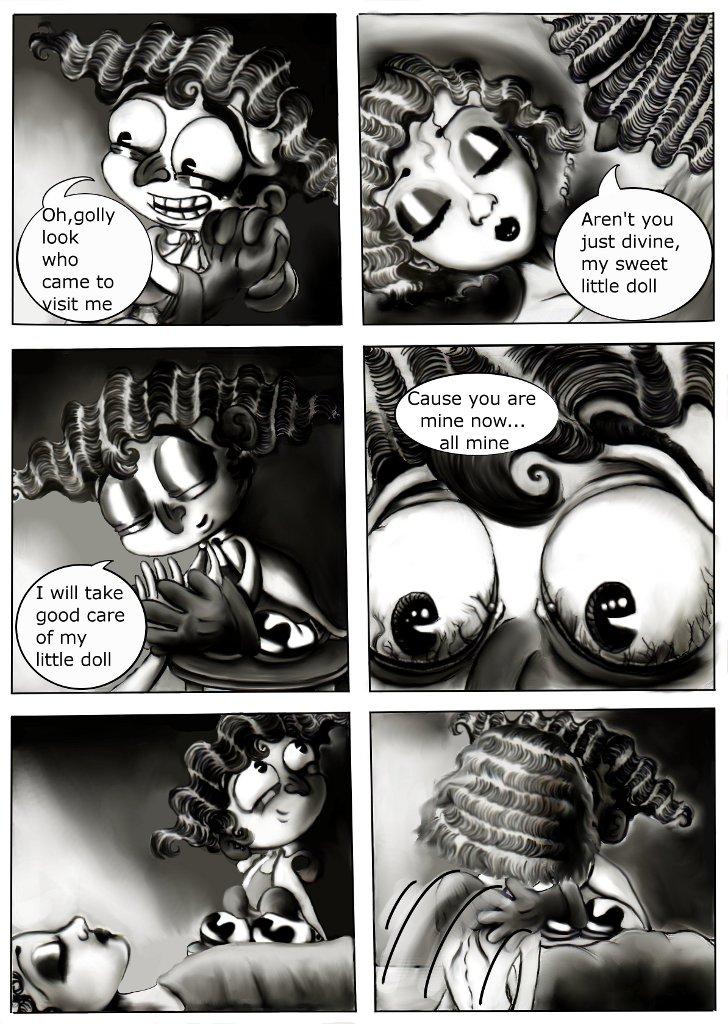 I really tried to make this look romantic but it just came off a little creepy xD
Anywho,thank you guys again for such great feedback and sorry it took me so long to update =D you guys are the best

This is sick and wrong! Why would you do that to a child, lady?!

binaryfaye-lol yeah :p HighQueenDoodles-thanks :) Air Raid Robertson-I just want to speed things up a bit :p last thing I want is to find my own comic boring Chuckee-yeah,you are right.My computer is being a bitch and I can't download a better font.And making speech bubbles is hard enough already :P Naw,you aren't being too critical,I'll work on that I'll update this week,ya know,school n' stuff Abt Nihil-I'll try,thanks for commenting =)

I agree with Chuckee - the art is FANTASTIC, it just need a better (and centered) font. I also hope this is not too nitpicky... I really love this comic.

@Doc: Really? I don't think it really goes with the style of the comic at all. It's far too modern and computery, while your art evokes a feeling of "When my parents were children..." Same with the speech bubbles. And you really should center or justify the writing inside them. Am I being too critical, yet? (And when are you planning to update again?)

It didn't take long to sneak in a quickie.

This art is awesome!

I love the 4th panel. The eyeballs! That just in and of itself made this comic 100% more creepy.

Hunchdebunch-thanks,glad you like it =) NickyP-a bullet in the head might help Wow,I still can't beleive I'm getting such great comments,thank you guys :D

I do believe the good doctor NEEDS a good doctor. Good art, as expected.

This comic looks cool so far! I love your drawing style :D

deanlegion-thanks =) Chuckee-yeah,it's hard not to notice :P but I'll stick to this one

Lots of fun and yes... creepy!

Larry-creepy creepy creepy :D Ayesinback-I had to google Visine xD lol,you are right Byth1-he is into anything he has control over...and I mean anything Plymayer-livin' on the edge :p Dark Pascual-0_o

Romance with a dead girl can only go so far.

Making out with a corpses are romantic? lol man, good page!

Lazzaro is not only creepy, but he needs some Visine. But the art remains amazing!!

Well let's be honest it's a dead body so I think it'd be creepier if it didn't come off as a little creepy.