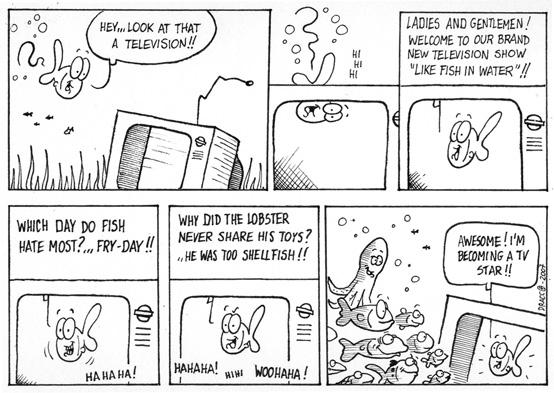 It's the era of reality shows, could we not have this strip?!

Oh, yes… I have to confess, the two jokes that are told were found on the net some time ago.. Hope it may be used…

*UPDATES ON MONDAY AND THURSDAY!*

what have we learned? Fish love puns

To answer your question, I believe the copyright to those jokes is currently owned by PopSickleÃÂ®. I love it!

Similar to my TV fame...

Glad to see you back in the saddle making strips!

And very well deserved fame it is- he is actually being interesting to watch ;)

The next Seinfeld. -Loran.

That was quite funny!

I used to do that when I was a kid!

those jokes are so wierd they're funny

hahahahaahaha... shellfish - ahh.. they're so gunna eat'm. I just know it.