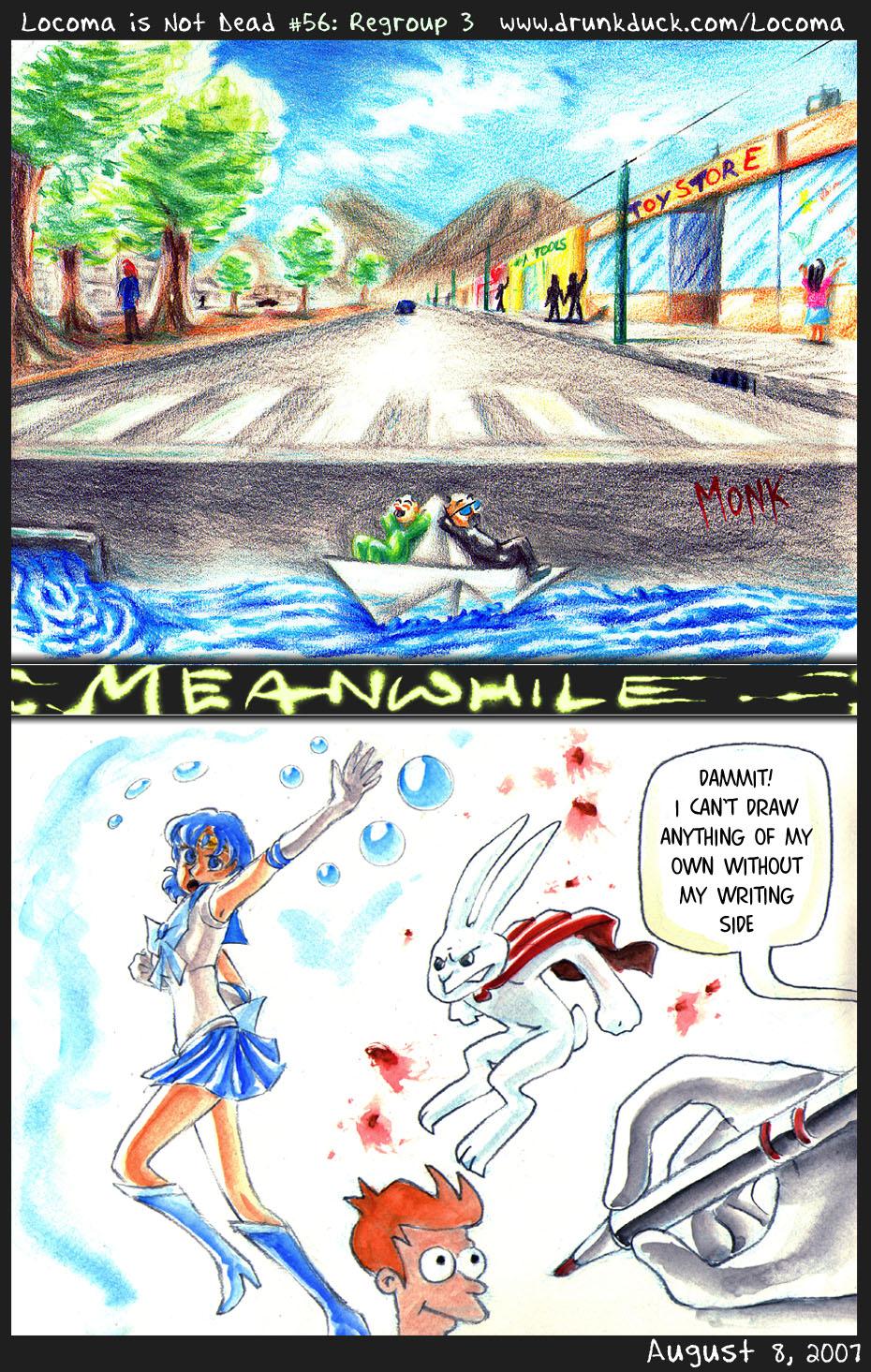 Sorry about last week, I have to buffer at least 1 comic for when I get swamped… heh. Less whining and more describing: the first half was made completely in colored pencils, veeery slowly. It is a landscape of the main setting in which the Toy Store is placed. Remember that right across the street is Paula's house too (passing through the trees, crossing a second street). That appears in “Nose Girl 3”.
The second part chars are: Sailor Mercury from Sailor Moon, the superhero bunny from Impulse (a webcomic by Bastet MacKinnon) and Fry from Futurama. There's somebody drawing them inside the comic, I didn't draw them just for fun, it's part of the storyline! And yes, Bastet. I love that bunny, is fun to draw :D

2ndwind: you know, once a week I used to post reviews of the comics I read, but I don't have the time anymore… at least not for now.

dracco: thanks man! is Gupi swimming under them? :D oh and I got your PQ, I'll reply it as soon as can

Usedbooks: haha no kidding! what a coincidence… I don't see Kaida singing it, haha. I wonder who will. Credit goes to tweebus for that one, that's why the writer says “that's not even in the script”

Peipei: hehe don't worry, I think I don't go that fast in my storylines. Basically Paula (the toy store clerk) got together with Mark (the other clerk) and in the meantime more Locomas popped out. I think they're going to regroup at last… unless…

I like the relaxing on the boat... and the Fry. Best Fry quote: that guy: would you like some hair gel? Fry : no thanks, I make my own.

The instant this came up on screen I said "Wow" out loud. But probably not loud enough for you to hear, so... Great pencil work.

I love that first panel! It absolutely rocks, from the perspective in it to the medium! I love the bottom part, too- it's so refreshingly bizarre. Heh heh heh. But the top part is my favourite.

Ooh, I hope it's 'Illustrator Locoma'. That would be all kinds of awesome.

Hehe. Yeah, Kaida doesn't sing (well, maybe if she was really drunk...) I don't know which I like better on today's page, the top part or the bottom part. Both look great. I think I'll have to say the top half, though. The colors and texture are just too fun!