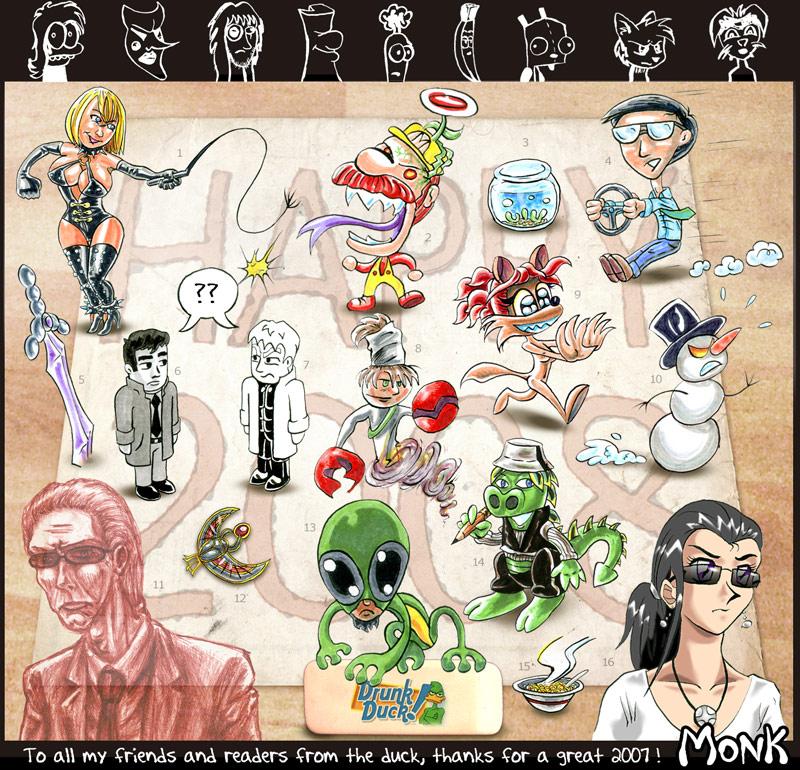 BIGGER PIC HERE
HAPPY NEW YEAR to all my friends and readers from drunkduck! Your company and involvement were of great inspiration even in the toughest moments of this year. Thank you!

OH!! please, I have each char in a separate psd/jpg so if you want your char separately send me a PQ and I'll send it to you as a present


—
Chars notes:
*Kaida was done using a classic anime adult-game style (or at least I tried to do that, haha). Specially one called “Chain, the lost footprints” video - info (NSFW) awesome graphics, acting and story!!
*Joseph was done riding an imaginary vehicle since his comic has lots of them in it, greatly drawn BTW
*Vixie is chasing Evil Snowman because Vixie loves snow and running naked through it. In fact her last update are the chars (her comic in JAIL because of that… They always forget about the jail part, haha.
*Sand pirate guy's color are wrong, I just saw a colored pic of it… I tried to fix it digitally but it looks like crap, sorry Bit Player!
*Loran and Darren were drawn like mirrored only because of the trenchcoat, nothing deeper than that! :P
*Kristin came up a lot naughtier than planned, it was a surprise even to myself, haha :D
*Finst was the easiest to draw… I guess pencils are my forte after all :D
*I didn't have time to include you all the way I would have liked. There are a lot of you, people!, hahaha! Have a happy new year!

(OK! I lied, Locoma will continue the story on Thursday, not tomorrow! :P )

Holy cow, Gunnar's(Banana) in there! I can't believe it took me this long to notice! This is just too awesome.

Happy new year to you Lacoma! Your depiction is just too cool. Hope you have a great 2008!

Final picture looks fantastic. Your effort with this is really admirable. What a terrific end-of-the-year project!

Vicky: Finst was too big and red and it grabbed all the attention, so I had to tone it down. I used the ghostly effect to melt him with the rest of the pic. [url=http://www.drunkduck.com/Locoma/gfx/finst.jpg]Here's[/url] the original version M.Organ: fixed! ;) thanks to all of you for being so awesome :D

I have no idea what this is about, but it sure looks awesome!

That is a neat idea. Cool to see all those characters and designs with your artstyle.

Good thing you reminded me. Life here has made my mind look like a sieve :) Great work you are doing here.

Oh, the name is spelled M.Organ, (which many have gotten wrong because it's so odd). Drunk Duck doesn't allow periods in comic titles or user names which only increases the confusion.

Didn't say it before, but this is a really cool idea. Can't wait to see where I'll fit in, haha!

Wow! Thanks for including Darren, that was really nice of you. Or is that Anthony in Darren's body? ;)

haha yeah watch out for vixie thanks man, and happy holidays to you too :D

Wow! I was just gonna post that this was such an awesome idea and then I saw you drew Evil Snowman!!!! OMG! I'm gonna have to pay you to draw him from here on out! He looks so awesome in your style, even when he's running away from someone who wants to run through him naked lol. It's excellent! All the characters look great. I'm really going to have to check out these comics now. Thanks! Happy Holidays.

tantz: hey I told you! sort of :P vicky: hehe thanks vicky, I'm glad you liked her. I wanted to see how would Kaida look as a classic anime char. It does show that you like anime (specially in your pic, you can see the Conan poster right behind you, haha) although your style is very unique. roflinator: thanks! loran: you're up on thursday ;) darrell: hehe I decided to post them this way because I haven't finished all of them frogman: glad you liked it frogmate! morgan: I was aware, but never thought of suggesting my stuff, man you're so useful :) rudolf: thanks man! are you done eating babies? :D

Great work! Wow, I turn my back and you crank out awesome stuff without telling me. XD