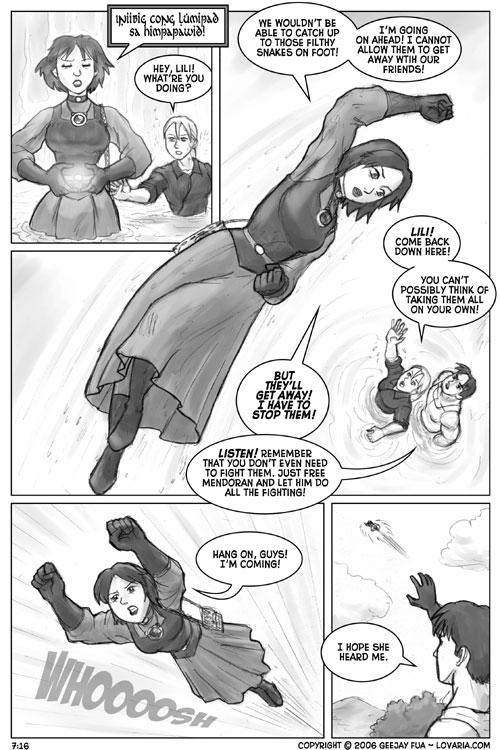 I'm back to updating again after three weeks of doing another comic story. Here, Lili takes flight in a bid to catch up with the Sylosians who had taken Fr Sephriel and Sir Mendoran a few pages back. Not much to say about this page really other than that.

I did employ some of the newer techniques I've picked up while doing the other comic which was good. You learn something new everyday.

Update: I'd just like to explain why Lili didn't use the flight spell before jumping into the waterfall. I knew that there are people who are going to be asking about this but I didn't think I need to explain myself until my brother actually asked the question.

Well, wizards in Lovaria just can't cast spells one after another indefinitely. So, wizards have to use magic sparringly. Lili only found out for sure that she was outside the cave after she had jumped into the waterfall. After that, she knew she could cast a Flight Spell (that has a limited duration of effect, by the way) in an attempt to catch up with the Sylosians.

Or… maybe I should just give you a super simple explanation: Lili haven't thought of using the Flight Spell until after she jumped. Ah, well.

Like this new page. Actually, I didn't think it all that strange that Lili didn't use that spell until then. It kinda seemed like her not to think of it right away. (Not that she's a ditz, but she's really not very experienced in the field.)

Hi LanceDanger. Thanks for that. :)

o_0 This looks simply AMAZING 0_o Definitely will get up to speed on this webcomic, it's as good as fav'ed and 5'ed! =3

Thanks for the 5 rating guys. Ringjo, I knew that question is going to come up. :P Here's the thing. She has limited power. She wouldn't want to waste magic if she can help it. She only used the flight spell only after she was sure she's out of the cave. If it turned out that the the other side of the waterfall wasn't the outside, she would've wasted the spell. That's why I did it this way, at least.

Nice page as usual. but there's just this one thing that's been bothering me. If Lili can make herself fly... why'd she have to jump over the waterfalls? O_O