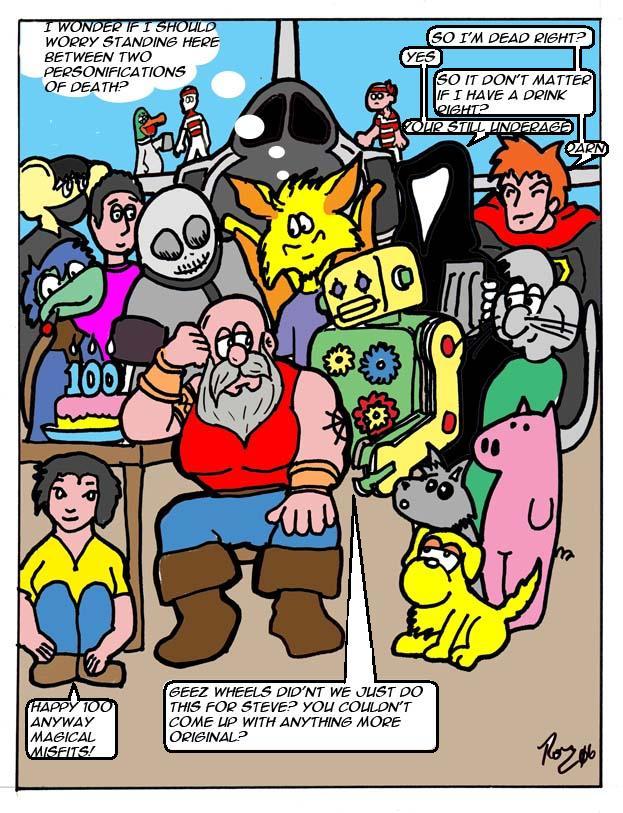 yay! 100! awesome work, i especially love the one about the pinto... classic it deserves more than 5

god man catchin up on 100 comics is hard work!

Yay! My Death has been partying alot lately. Great picture, and happy 100!

Congratulations on your 100th comic! Here's to hoping many more are to come!

Wheels doesn't look like he's having any fun. Congrats on 100 comics!

huh thats a very interesting picture! thank you for drawing it

Yay! Another milestone party! I'll get the beer in ^_^ Conrgatulaions onthe 100 man. I hope you keep it up :D

Congratulations, now how about a hundred more.

well i think I will worry a bit...but hey we got re-animate the dead kit if someting goes wrong..or did you use it already? looks like a great party:) happy 100..so heading to 200

Forgot to rate, silly me. Even after I said to myself "Okay Dan, after commenting don't forget to rate it too". Not my best moment to be sure...

Congratulations on 100! It's a big deal, you should be proud. And thanks for using my character, it means a lot to me: both because it's a character from my comic, but also because it happens to actually be me, so that's double flattery. Thank you. BTW though Dan's not the drinking type. He wouldn't be interested.

Wowie, congrats on your 100th comic! That's a great achievement - and the camero filled splash page is excellent as well :) Here's tp a hundred more Magical Misfits updates *thumbs up*

Way to go, MM! I really look forward to reading the new strip every day... Keep up the fantastic work!