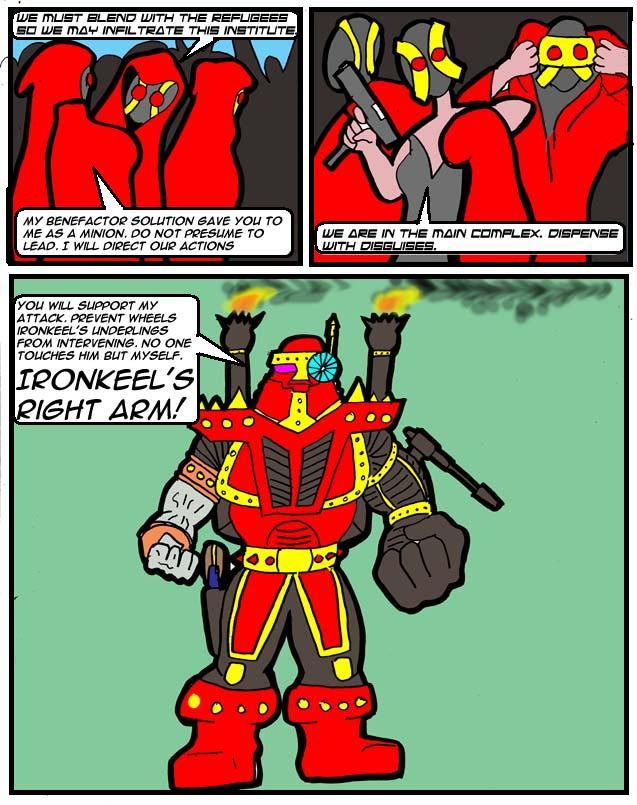 TOLD you it was gonna be bad... where are these guys coming from, anyway!

And here iwas thinking he'd use the old "make an evil clone from the hero's body part" ploy. Love to be suprised.

Let me guess, because it's his arm, it knows what he knows about engineering.... I'm guessing Wheels is going to need a little help and his arm is probably immune to the mini-gnomes.... Let me know if I'm guessing any of your plot ideas.... ;-)

Ash Williams never had to face something that scary!

At least he didn't shout out "Mecha Warrior Right Arm Assault Team Assemble" or some such nonesense... Now he's a cool badguy! He's still gonna get hurt though.

Man oh man! This is gonna be GOOD! Wheels is going to win, but the battle will be awesome, I'm sure.

5 5 where are wheels "pets"? now would be a good time to find them.. and if we could just get a space dragon involved the war would be over... hey i did give you a heads up about not reading that song.. and it not as catchy as the last two...

See if I was him, I wouldn't have used some mummified nastyness arm... I would have just put on two of those large robotic arms on. Very cool.

I should get some smokestacks coming out of my back...

Okay, those masks are so freaking cool looking! Seriously (why would I kid over the internet?), they are very badass. As is mecha guy.

Oooooh, so they kinda zombified Wheel's old right arm. This should be a good fight.

haha,,, what a shock to find a few comics back one titled with my name! thanks for the info, ive read through the archives of elvenbaath too, that helped