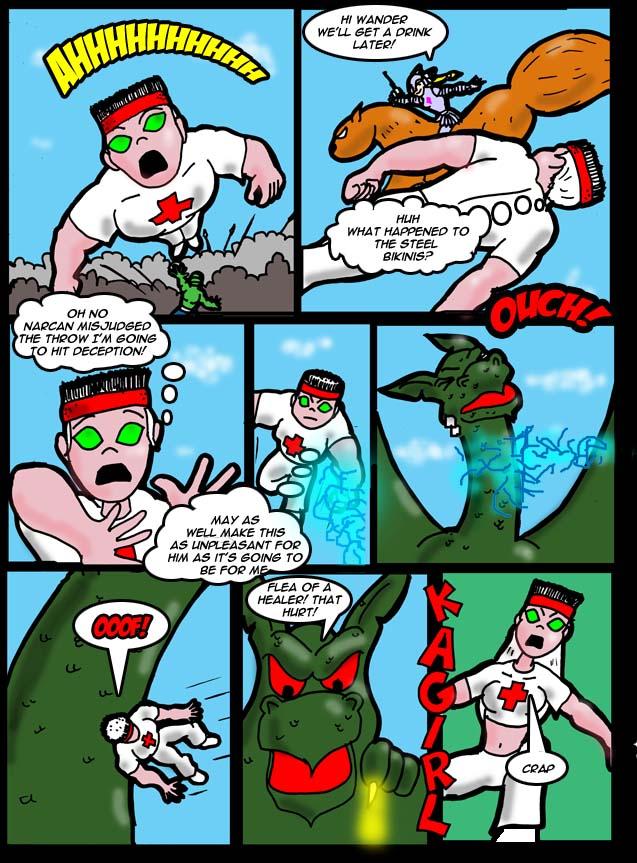 If you want to catch up on the crossover wars here is a great place to start.
For those of you who don't know who the squirrel rider is look here.

About time! Wander's had that coming to him since TG comics first popped into the Crossover Wars...

Love the 'what happened to the steel bikinis' line - that's such a great touch :D

Wow lol! Great job on the anatomy of Wander when he's flying through the air!

KAGIRL. Was that an incantation or a sound effect? Either way, things just got complex for Wander.

Crap indeed! Not your comic though, it's still awesome

Seems like Deception has picked up a new trick on his merry way :P

Ickus... It gave him breasts, and longer hair, and changed his outfit, and his figure... I think it's safe to say that the spell used was a compleate gender change spell... probably the *ka-girl* spell he stole earlier.

This is why the "Fastball special" never really caught on!

Did the spell Deception cast on Wander give him breasts? He has them in the last frame, big ones at that.

man, he looks pretty cool flying through the air in the second panel, almost as if he wasn't thrown but can actually fly (like neo!)

HA HA HA! I almost feel sorry for Wander, not that the lecherous sod doesn't deserve it.

Aww, did that nasty lightning sting? Does the poor widdle wormy want his mommy to kiss it all better? (Note to self: Use lightning spells) Incidentally, and out of character, this was foreshadowed in an earlier EOU strip where Deception says something along the lines of "I need to learn this" about Wotch-style transgendering magic.

LMAO deception has that power? In wonder how Wanderer will cope being a girl

Hmmm, I think that counts as an 'opps'

What?!? That idiot stopped drawing Gertrude & Brunhilda in steel bikinis?!? Well, that's it! I'm not reading The KAMics again!

Wander has a huge rack in that last panel.