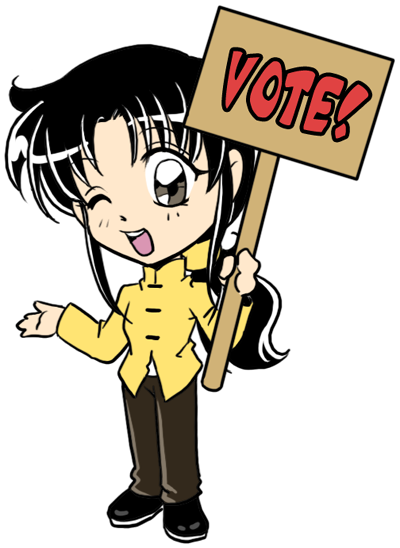 It's MQ's Anniversary month again! ^o^ And so I thought I'd like to draw a character popularity vote pic, something that is found in a lot of comic/manga series! :P

Vote for your favorite MQ characters~~ All voters names will be entered into a ‘raffle’, a winner will be randomly chosen to win a sketch of them/their OC with a MQ chara of choice! =3

You can vote by PM, Deviantart Poll or if you don't have an account on CD or DD, head over to MQ@SJ where you can comment as a guest~! =DD

Next manga page will update this Sunday, September 5th!

I have to say Mr. Jade is my favorite.

Hehe, thanks everyone! =D XD Voting will last this entire month~!

Voted XD will vote twice. Zircon, Spinel, orion, or taffy- or even the elven king, but orion I think~ your lovely characters are so hard to choose from (but, go elves~!!!!) the way lily-sensei draws herself is soooo cute X3

Hmm who shall I vote for...