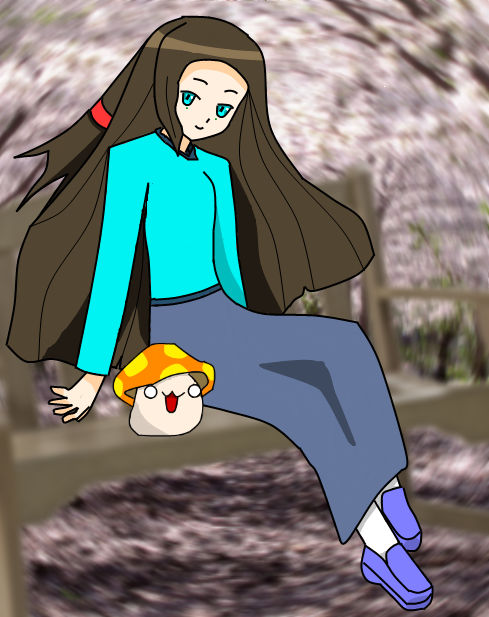 WHOAH I UPDATED?! SAY IT AIN'T SO! …Wait how many of you still have this thing favourited anyway? Nobody? Nobody? Aw, such a shame…

SO ANYWAY! Like, I decided to update (albeit not with a comic) just to let YOU guys know whatâ€™s going on. I don't intend to let Maple Legacy die, even if it has been rotting here for, what, two years now? I intend to start reupdating after the current exam period (darn GCSEs), though don't expect many comics to follow a plot, more likely they'll be little Maple shorts which portray actual problems in the game with a moral lesson on the side. Also laughter and humour. Humour. Not humor. Humour. Annie and Issaru will keep on living and cameo in these shorts to keep me happy however. =D

So this is like some random drawing I felt like doing, consider it a late new years present. Itâ€™s Annie, on a bench, with a mushroom. You could not believe how many tutorials I went through to get the face looking ok and the hands looking somewhat decent. Yay. NOW FOR YOUR ENJOYMENT, A FEW FACTS ABOUT THE CREATION OF ANNIE:
1 - She was created from the body of Issaru. I stole the top of his hair for a cheap way to emulate a decent highlight. She has a massive forehead from where I removed Issaru's headband. Her skirt is just Issaru's trousers (or ‘pants’ for you yanks) but both legs are merged into one. She was the first custom sprite I ever made and I was DAMN happy with it. Until now where I think back and ask myself what was I on two years ago?

2 - The green dots under her eyes were a tribute to the very awesome Axel from the Kingdom Hearts series. Her rose petal weapons were also a reference to Kingdom Hearts, mostly Marluxia.

4 - The idea for her original name being ‘Melini’ and being changed to ‘Annie’ by Issaru was taken from RPG World. Before it stopped updating and while it was still awesome. I also had an idea of Melini being a sort of ‘Alessa’ of Maple Story, you know, Silent Hill, the Order, Claudia wanting her dear sweet Alessa to come back, so on so forth.

5 - I don't know what addiction I had to blinding bright colours at the time, but if you can't tell, Annie's top is supposed to be striped with three different shades of blinding light blue.

ANYWAY I think thatâ€™s all for now. Look forward to more updates soon, specifically my guide to Kerning Party Quest from the view of an idiotic Mapler… So it could be the view from any user on Maple Story. ZING!

Keep on smilin'! ^_^
Also guys: http://www.drunkduck.com/KALA_dan/
Check out Kale Dan, I can't be bothered to link it…