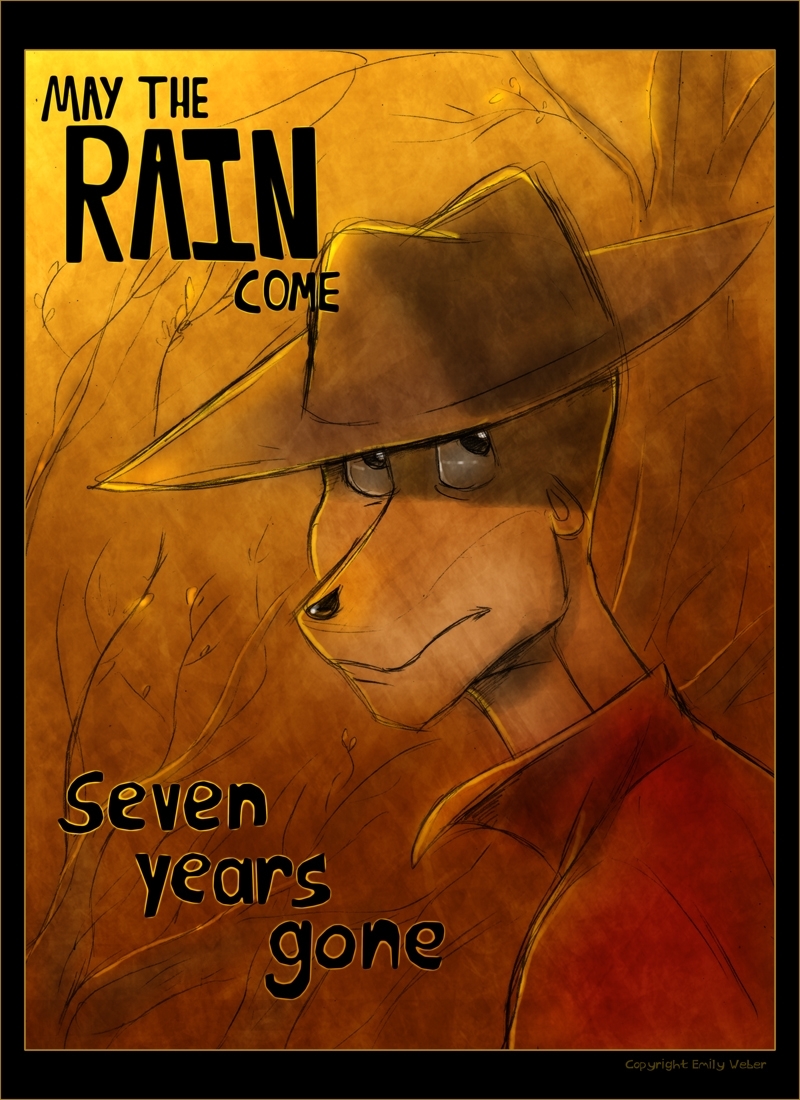 Okay! Here we go! No turning back now!

The first chapter page for my comic, May the Rain Come. I plan to also have a cover for the whole enchilada, but I'll do that probably after I've finished the comic.

–What will this comic be about?
It's
about this guy here, William Weasel. He returns home after seven years
of being at war only to find his hometown deep in a drought, and his own
life eerily empty and devoid of meaning.

– What can you expect from this comic?
For one thing, it'll most likely be rated PG13 the whole way through. How would the motion pictures association put it? For intense moments and scenes with smoking or some such falderal.

–There will be no fan service. No sex scenes, no shower scenes, no randomely inserted gay couple for people to get off on.

–This
is a very character-driven story. There won't be helicopters exploding
into burning buildings like a Michael Bay film. The characters will
hopefully keep you watching just by having a good script, like one of
them old school black and white movies.

–In fact, this comic has a
‘40s vibe. (It won’t be exactly true to that decade. I don't have the
willpower to do research like that.)
Because of this vibe, William
here does indeed smoke. In fact, he'd probably smoke if this were a
modern story, too. His character tells me so. So! If you're intensely
against smoking, you better not be reading this.

–The story will
also have a slight, unavoidable (as far as the story goes) anti-war
vibe. I'm trying to keep it low-key, but William needs a little bit of
it in order for his character arch to be complete. So! If you love war
and condone it at any cost, best stop reading here.

–What does Zime want as far as critique goes?
What
I don't want: If I have a panel where one of the characters looks
off-model or something, I don't care. Especially since I'm not going to
go back and re-draw it.
BUT. If you see something I consistently do wrong, or something you just don't like that I keep doing, THEN by all means tell me.
And be sure to point out spelling errors, please.

–How often will Zime update?
Hopefully every day. Ya know, unless I have a test going on that I need to study for and I forget.
Anyway! I hope you guys will enjoy the comic. More to come!