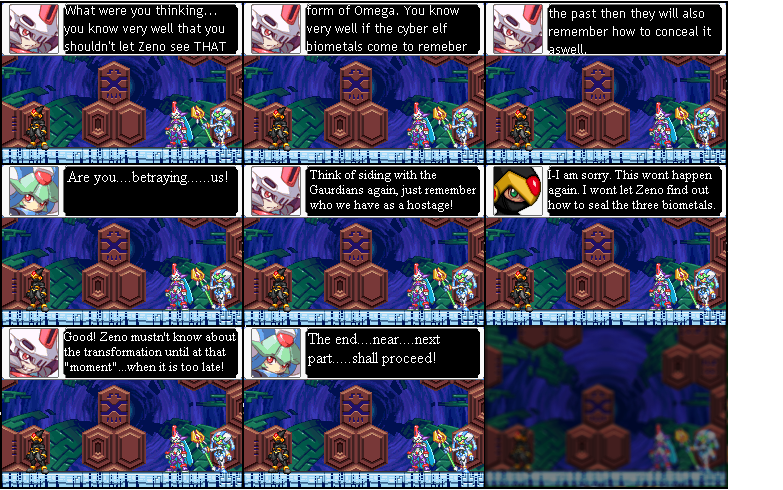 Who's side is shadow really on. He tries to kill Zeno with Omega but he is also trying help Zeno unlock a certain seal. Was he REALLY trying to kill Zeno.

Also who does Prometheus mean by hostage. Looks like Shadow is forced to work for them.

ATTENTION! I will permanently discontinue this comic due to the fact that I am unsatisfied with this plot and storyline. I wanted a more original project. Another reason is that I have improved my spriting, and therefore have a better Crimson. As well as a better Zeno. Which can all be seen in my forum: http://megamancorruptmatrix.co.nr/ Also, this is where my new project is in production: Corrupt Matrix: Crimson Genesis This has some Megaman type element but is an original plot on its own as well as in a different universe. This will hopefully a game or atleast a comic, but we are aiming for the game. Here is the storyline so far: Originally Posted by crimson hammer Well so far we got this concept down. It has been theorized that earth is of only one of several unknown dimensions. So what if something caused the dimension of earth to merge with another? Now this is what caused this whole story to take forth. Two God-Like beings, Harut and Marut, of another dimension have caused the dimension of earth to merge with their dimension and lifeforms of planet Zeta have been released onto earth. Now these life forms are discovered by Aurora a military orbital organization.These programs have been discovered to need a host to survive However, once a host is found the program fuses with the host to give the host extraordinary abilities. Further problems ensue, when it has been found that there are further levels of evolution. Once evolved the human will have a humanoid form. However, the if human does not have enough will power to have control over the first evolution process, he gives up his control and becomes a more beast like figure, which becomes a engulfed by their inner evil. A part of Aurora was excited by this and wanted a hold of this power for military usage but another side wanted this to stop. Thus a division occurred and caused the formation of Erebus. Creon as the leader of Erebus set out to harness the power of these Genesis programs. And Aurora wanted to put a stop to it. Later Creon finds out through interrogating one of the programs that the programs were created by two much stronger beings. Harut and Marut. And it has been found out that through them further evolution can take place. Creon is astounded by this thought and creats a plan to capture harut and Marut through the powers given by the Genesis Programs. So Erebus abducts five children to become the test subject of five specific Programs that were found. However, Zeno, one of the children that were abducted was able to escape before being implanted with a mind control device. Zeno is later rescued by Aurora to put a stop to Erebus' plans.

Hope you could update...

Dude, I love this.

sucks to be you in all seriousness

hey smart one, there also something called a life. Im busy now. I have an elective where we do research on a different disease every week and then a presentation. Besides school. My parents are really giving me a hard time. And before any of you people say you can relate....try getting a chair thrown at you once in a while...and then go through some other means of violence handed to you by your stupid step father. Look my Birthday just passed and my parents did not even say a simple "Happy Birthday" which makes me think when they say "they wish I was dead" really meant something when they said it for the hundreth time. Also I could barely go on the comp anymore...so I could not make a comic even if I wanted to. Im sorry I am trying to make progress but life just loves making me fall on my face again and again. Now all I am thinking about is how to get away from home and rent a room and board...but then again that will be in like three years. I have to think about expenses, rents, fees etc because when I mean I have to get away from my parents I MEAN IT! I sorry I really am going through some hard times. And along with that my parents stab at my sorrow even more by proving their lack of understanding and comparing me to my @#Q$#@!#@!$#!@#$#@%@$#! abusive biological father who I sent to jail because he abused me...and they are comparing him to me...IT MAKES ME WANT TO FUCKING PUNCH THEM IN THE FACE! Im sorry, when I get better this comic will go back on track.

I'm a Sophomore and its not a Bitch. I've taken all the hard classes and have all A's.

it's almost a month lol

Very nice comic! Hopefully more on Zeno soon though; I want to see if he gets rescued, or kills "Omega" himself. >_> *goes back to wherever*