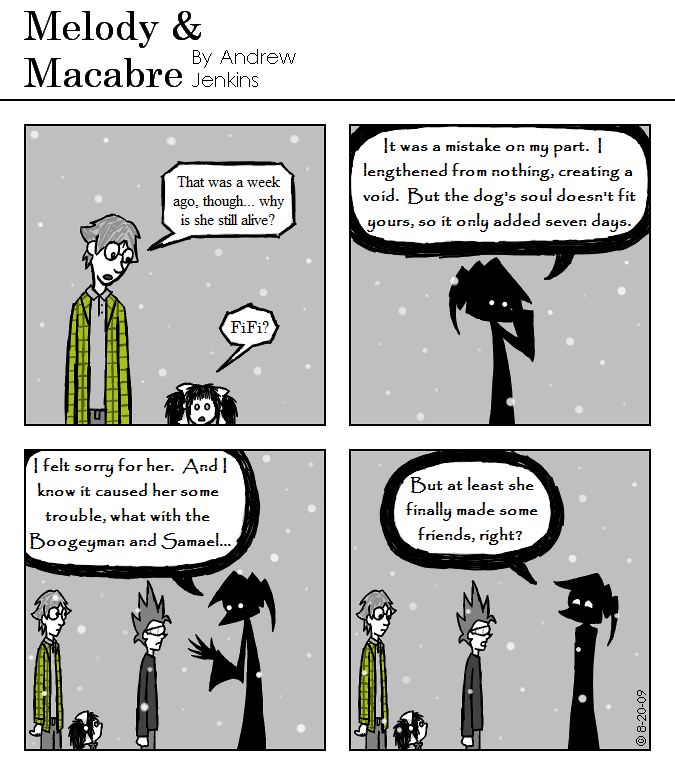 Keep telling yourself it was all for the best.

So hey, you remember that apparently superfluous story Simon told? Turns out, it actually explained the whole thing with FiFi all along. You can't add something to nothing, after all.

It makes me wonder if all those people were actually supposed to die, though.

Anyway, so here we have two seemingly conflicting reasons why Death did what he did. Of course, a bit of compassion every now and again wouldn't be unheard of - he's made by us, after all - but when you think about it, without Melody, he couldn't have led his little game of chess to its intended outcome.

So, I actually had two pages here. I accidentally misread my own page numbers and had two labeled 299 (this is, in all technicality, page 299, excluding bonus comics and coverpages). As such, I had two scripts, both ending with Ace making some insult and Death knocking back another.

I think one involved the suspicion that Ace was just jealous because Death would never pet him.

It's all good though, I combined the two unfunny parts to make an amusingly uncomfortable moment for Simon and Ace.

Don't leave just yet! We've got one more page, and I intend to have a completely NEW end-coverpage, unlike the other 29 chapters (and DdlM).

Also, Sunday I'll give a teaser image for my new series, which I'll also post on that comic's page for something of an intro, haha.

No matter how you look at it, the ending would always be the same. Whether she died in a day or in a century, death would always claim her. At least he gave her unfortunate death a little meaning and gave a bit of joy to her as a friend.

I thought this was set in 1999? :S And uh... what did he lengthen? Every man owes a life, so the saying goes. If someone cheats death then someone they know will die in their place. So I'm guessing that's what Fifi had to do with it. Maybe Death befriended Melody because he knew she was going to die anyway so it'd be less loss if Samael did kill her. ... But I reckon that he cared after her anyway, in the end. Poor lickle Mel. You're so mean Andy! (Intrigued to see what the next project is already though... I'm a traitor)

He really does have a point there. Plus, reaping kids, especially ones that were victimized like Melody, are never easy ones compared to most of the other reaps where there was something justifiable.

... If you could call them friends. Well, least she had some fun right? Right?

Awww Morty is such a sweetheart!

Some of us are not meant to have lives... But that doesn't mean we can't still have fun. :) And share that fun. (Those of you who can draw have an additional in that last part. ;P) Morty... He DOES have a soft spot for her. That's my opinion, and I'm sticking to it.