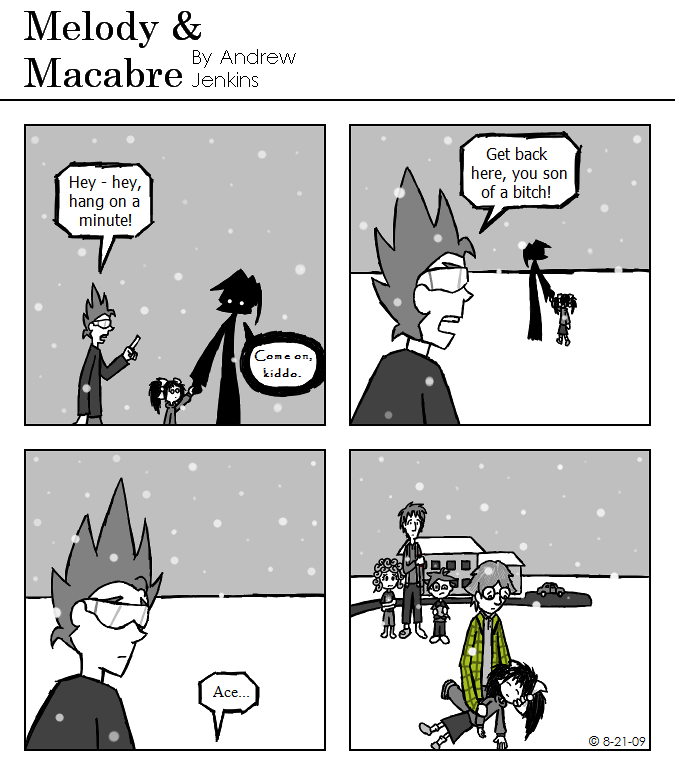 I hope I did that last panel good enough. I kinda wish I did a LOT of pages a lot better than I did. If I could, I'd probably go back and redraw about 90% of the entire series. XP

So, I think that's actually the harshest swearing I've actually had throughout the series. But it kinda fits, given Ace's bad history with Death.

What history is that? Why, I'm glad you asked!

…I can't tell you. If I get to the sequel, it'll be fleshed out, I promise.

(It's really more of a spinoff, though… Ace will be the main character, though many of the characters from this series will return.)

Anyway, this one. At one point, I actually started getting some watery eyes when doing the last panel. I'm good now though.

I'm still not entirely sure what I want to do for the back cover page, but I know I want it to be special, not just the reverse of the cover page for this Scene. Since it's supposed to be the back of the entire series. Ah, I'll think something up.

I wish I knew what else to say… again, I'm sorry.

I knew a lot of you liked the series, and I hope you will all try and read my other stuff. I have EpicSaga coming back next week, hopefully, though I'll technically be on break to work on the new non-MM series.

…I should really do more Time Hobo, I really do love them but I've been so caught up in this stuff. So I've really only done… like… three comics of that.

Um… so yeah, stick around for tomorrow.

Beautiful ending. I'm a little misty-eyed here. Great job. Whatever you come up with for a back cover will be great. Thank you much for this comic, I was always excited to see it update!

fitting ending, though i think she should at least be smiling in the first and last panels. At least she is no longer alone.

Wonderful ending and wonderful story! Sad that it's over...

Wonderful, truly wonderful, love how Melody just never hesitates to take his hand, and walk away. I think the last cover should be something innocent and fun between the two of them, but that's just me... Like the two of them playing marbles, I have no idea why... And him with a bag of souls by his side. I like the idea of them not having to be lonely anymore. It makes me happy. I don't think this is a sad ending... There I'm only sad that her story that we can see is done. Heh, maybe them playing 'dolls' with people's lives... Lol. Eh, your comic, I'm sure I'll love it. Have so far. :)

I think it's an appropriate ending. Both of them stated their loneliness at the start, and now they're definitely not. I could also interpret it as Melody's afterlife consisting of hanging out with Death for all eternity. Could almost picture her as the vertically-challenged reaper with pigtails :p.

Well done, sir. A good story doesn't necessarily need a happy ending - but there's no saying that this is entirely sad, either; Melody's life wasn't all that pleasant, and now she gets to spend time with her friend. Well done.

*cries* that was good.

Son of an Enigma-of-the-Human-psyche, possibly.

Agree with them all, but I will be sad to see it go. Although this page is sad, it IS incredibly cute, what with Monty this time taking Melody with him rather than just her soul in an orb... and Ace caring about her... And Simon cradling her with the orphans. (Can't see if John's still bleeding though xD) Very great story, with a very good ending too. Congrats :) You should ask skoolmunkee to post it in the news.

Good ending, and congratulations for completing the comic! That is a great milestone!

end of a good comic. thank you.