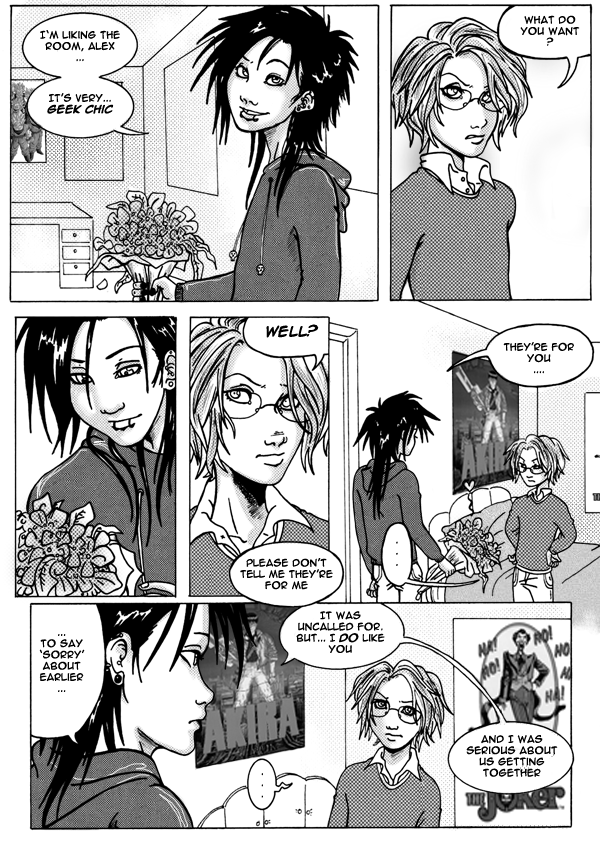 This is better, but still not amazing. My style's changed quite a bit, but I half-arsed this page in teh effort to try and get some motivation back for the story.

Anywho, that's all I have for now.

I love your story so far keep up the good work and I hope you continue with it.

are you planning to continue this comic????

i rly like this comic but its apparently dying.

-sniffles- no update in like... forever! I would totally sell my soul to ahigh ranking demon... or you... for more updates... wait! Scratch that! a regular update basis.

Such an awesome comic when ya gonna update? Dx -sniffles-

I love this comic

I Wanna see a kiss!!

*skips around gleefully* Yippee! An update! An update!! You haven't forgotten about us!!! SQUEEEEEE!!!! More please - More! - MOOOOORRRREEEE!! PLEASE!

Verrrrrry nice page! n__n Glad to see you're back! :D

Oh god o__o MAJOR jump in style improvement! This is much more than I have improved in the same time, it's frikken awesome! Keep it up! If you've improved MORE than this I don't know WHAT to say D;

I am sooo happy that you updated... and soooo many pages :) I love this comic and your art style is awsome... keep up the great work ;)

well, well now. look at that. the boy was serious. what say now alex?

soooooooooo happy you're back!

I swear I, thought I rated.

yay updates! I love this comic soo much, and I really missed it while you weren't updating. I just reread the whole thing, couldn't quite remeber what was going on. XD

YAY! New pages! So happy. I've been watching this comic for ages. Though I'm a little confused about what's going on. I think I'll need to reread everything now it's been so long. ^_^