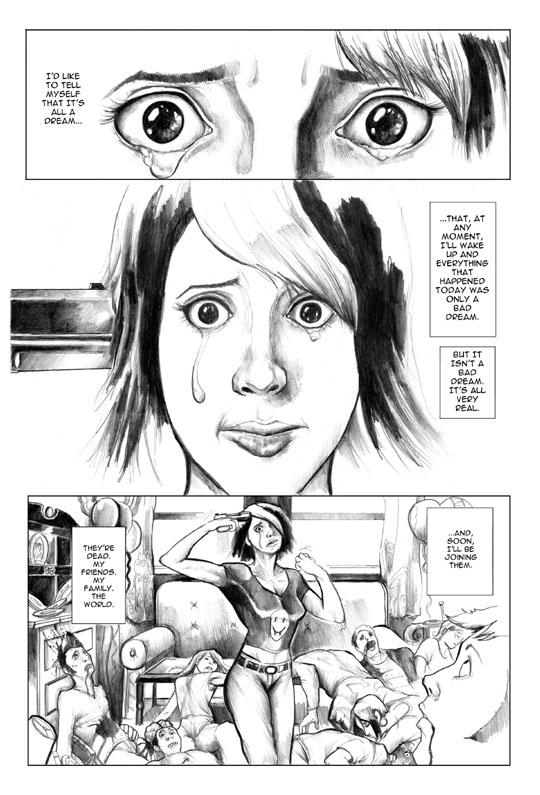 Here's the pencils for the first page of a story I'm working on tentatively called “Miss Doomsday” or “Everyday is Like Doomsday”. It's about a girl, Anne Hedonia, who wakes up and each day brings a new apocalypse.

I'm not quite certain what to do with this story or artwork. I'm thinking of inking it and sending it to some publishers (along with some other pages of the comic), but I feel that it's not very good. I was also thinking of doing a webcomic of it entirely in pencils, because pencils are faster than inks (although much rougher in appearance).

Confusion, confusion. Ah well, at least this is a comic where I get to draw some curvy chick as the central character.

The comic would have gore in it, but not of the super-detailed variety. It would be a bit more cartoony. The tone of the story would be along the lines of “Opey the Warhead”, with a lot of dark humor and drama.

The art is mind blowing, sad it doesn't seem like you're going to post more of it

You can't call it "Everyday is Like Doomsday" because then I'll never get Morrissey out of my head. Every day is silent and greeyyyy.

Da~mn! Those are just pencils?? I was just wondering what you were using, because it always looks like something I've never even seen before. I mean, they're clearly the 'nice' pencils, but STILL!

pencils look great if you go with out inking in my opinion. the stroy sounds interesting and I guess it all depends on your approach so its doesn't feel like groundhogs day. can't wait to see how it develops.

Stick with Miss Doomsday, it works. I like the Groundhogs Dayish apocalypse concept.

Anhedonia! I love it! Love your style, too.

Interesting concept, and lovely art! Usually I'm not into pencils, but this definitely looks like finished work. :) Look forward to more.

Sounds like a very interesting concept, and the art is beautiful =)