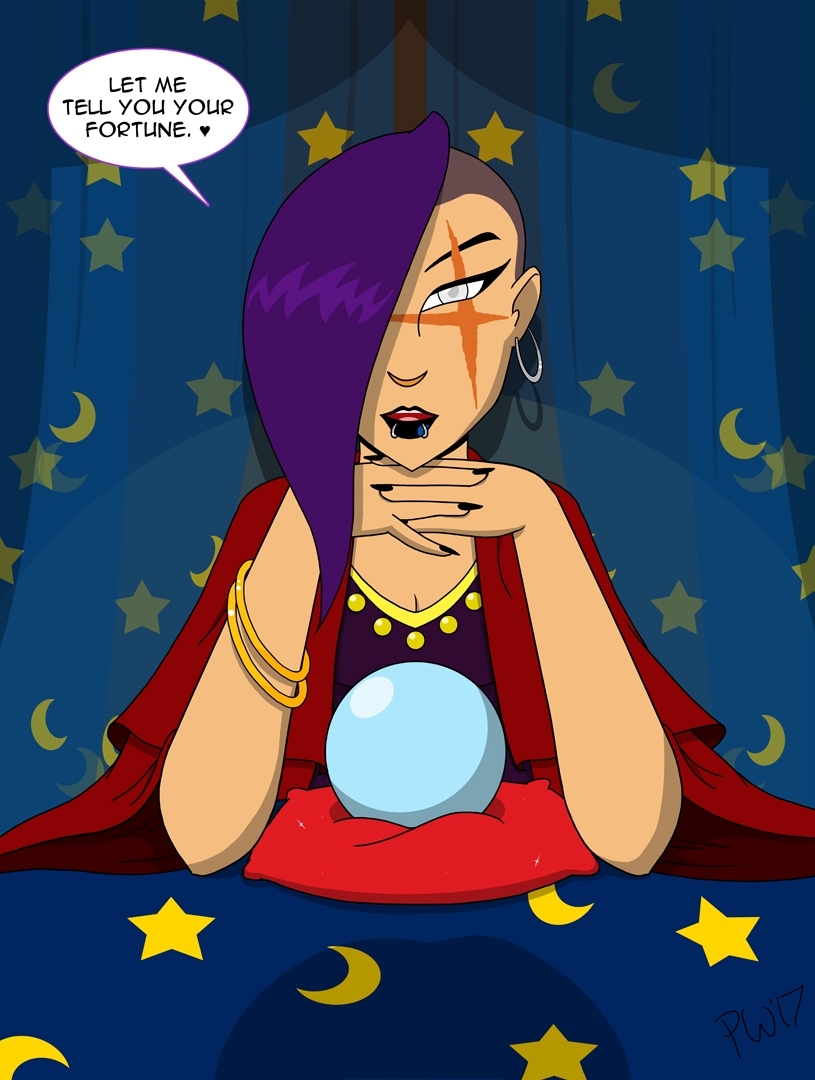 Seems like everything these days is getting a reboot. I've often considered coming back to this story and fixing some of the old problems it had. Continuity errors, dropped plot points, and misunderstanding Japanese culture. I don't know if anyone will be down for it but I've been working on it. But I know there's a lot of unanswered questions about where I left things off. The two stories will tie in loosely together since I built that into the main storyline, with most of the main cast set slightly differently.

So this is your opportunity to figure out how the original series was meant to go. I still remember what the plot was and how I planned to end it. Even some stuff that was in the comic but never addressed further, like the Time Monkeys, Aliens and alternate evil dimensions. Seriously, the future plot was a mess, but using Ask Mika I can at least tell snippits of what the future of the comic was like and how the reboot came to happen. The answers will be accompanied by quick illustrations like you see in a lot of those Ask tumblrs.

So if you have any questions you can send a note or leave a comment here and I'll answer them as quick as I can, possibly in an art stream. And I will also be posting art here and mostly on my Deviantart for character designs, plot brainstorming and other things. I'd love your input and feedback because if you've gotten through the archive and this long description, you might just be a fan.

But please don't yell at me for thinking of rebooting. I did write myself into a corner and in all this time since I would be no closer to the conclusion as I had it written.

....I need to check updates more often. No coherent questions until I've had some time to remember and process, just a note to say I'm glad to see you active. Well, for certain levels of 'active'.

Hmmm a bowtie would be different, and I will miss the old ties, but to quote doctor who, “bow ties are cool” so sounds like a plan!

I know this is probably a silly question, but are you planning to bring back the ever changing “mob ties” Sidney always wore? Also congrats on already geting to #1 on the top ten list already! That’s gotta be a record! Looks like a lot of people are excited for your return😁

Sidney is going through some changes. Lemme spitball this one. Since my absence I've started wearing Bow ties, so instead of his Neck Tie I was going to have Sid wear those. That would give me less surface area to work with but I could still make the tie change color based on mood. The neckties are going to be part of the school uniform now instead of bolo ties.

i am glad you are back ! please take your time producing a new page. other comics are on a once or twice a month schedule and it works for them. i remember you were stressed out trying to come out with a new page every week. you are creative and creativity takes time. we will still be here for each update no matter how long it takes. we enjoyed your comic and now i get to see if the teacher and the student fall in love and get married for real and if the gym teacher and Jimbo fall in love ( or something like it ) and get married. like you said unanswered questions may be answered. COOL ! good to see you back. : ]

Well, don't get too excited. This will be a reboot after a few more pages. There will be flashbacks available to the old timeline and so it will be a bunch of time skips to various important moments. But this new story will be similar but different. If I went month-to-month (which still may happen) for the story as I originally laid it out it would take the next 60 years to finish the original story unless it all got super rushed. Rebooting will still take time but there will be fewer people to fight and less characters to juggle. Hopefully it will still be enjoyable to read.

This was and still is one of my favorite comics, not just on the duck but the whole web! I have lost track of how many times I have reread it. I have greatly missed it☺️. I was so surprised when I saw it on the “top ten” after all these years! Ether a reboot or new story is fine, I just hope it will have that “spark” that drew in myself and so many others in the original.

Ooh boy, me too. Still going to have the same 'Misfits coming together as a family' thing. The 'I'm cute but I have issues' feel. And hopefully even more representation while keeping the same level of action and comedy.

Just taking a look for the first time. Looks neat

Dude I am super exited. I had forgotten this comic even existed, so reading back through it again? Hella fun. It was wacky as hell but I liked it and I liked the characters. I'd be real interested in reading a reboot!

wow this is great I actually join the duck cause of your comic and I always found it cute and funny and entertaining.

I'm sure it will also Burns is one of my favorite protagonist ever partly due to the fact he has a lot of the same issues I do one of them being anger issues don't see many people portrayal that the right thinking that the character just has to be angry and/or a jerk but you got it right.

I appreciate that! Hopefully the next story will continue that legacy.

oh wow, this was the first thing I discovered on back then drunkduck, loved the story, all holes and weird stuff in it. Glad that I kept it in my que :) I too would be happy with either a rewrite or justa completely new thing, but indeed getting to know more snippits is also a majorly nice thing. You had a good thing, still sad that it all got guncked up (not sure how to best describe it) but still happy :)

I got too ambitious. Tried to do everything and add every kind of anime to it but didn't really plan out how it would all come together. At the pace I was going it would have either fallen apart or gotten rushed towards an ending which probably wouldn't have been satisfactory. But I have ideas to make it more interactive and ask people's ideas and pitch the plan. So I'm not creating in a vacuum. Maybe a Telegram group. Either way, thanks for reading!

I'm actually happy to see this comeback, reboot or whichever.

Hard to tell how people will react