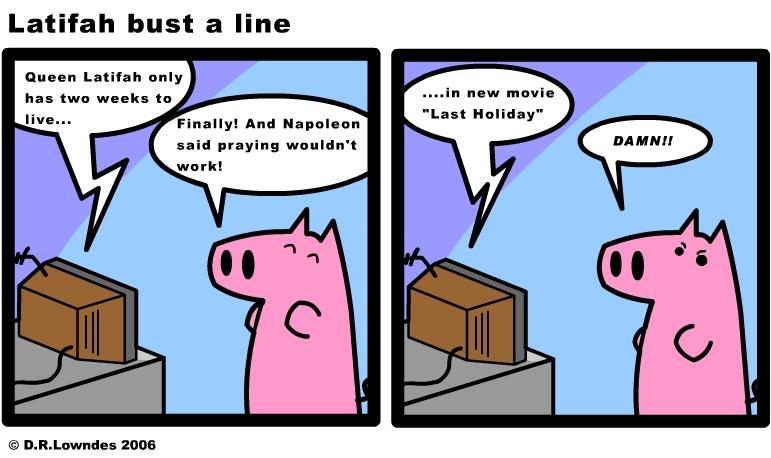 Over here on the farm in England we always thought Queen Latifah was a fantastically poor actress, but it turns out that in the USA sheâ€™s a rap/hip-hop/R&B superstar, which means itâ€™s alright for her to be a bad actress. With such classics as the Taxi remake, Bringing Down the House and Barbour Shop 2 under her quite large belt, her newest movie â€œLast Holidayâ€ is sure to be some thing awful.

I donâ€™t know it is about a hip-hop, a rap or R&B star that makes it acceptable to cast them in Films even though they canâ€™t act. Ja Rule is one such example. He did a fantastic job saying black stereotype phrases such as â€œDaaaaaamnâ€ in The Fast and The Furious, but I canâ€™t see why any casting director would jump out of their seat and say â€œThatâ€™s the guy weâ€™ve been looking for!â€

I think we have Will Smith to blame for all this, by probably being the first such Hip-hop/R&B cross over star, but he had the good fortune to be a pretty good actor and made it look easy. Mos Def did quite a good job in Hitch Hikerâ€™s Guide to the Galaxy, Ill admit that, but he does have an acting background, having appeared in more than one episode of â€œThe Cosby Mysteriesâ€.

I've only read two strips thus far, and it's going on my favorites!

Now I may have trouble with this strip since I am a musical moron. I will buy anything with Miles Davis' name on it which I am told is a pretty narrow selection seeing hows hes dead and probably not putting any thing new out. Don't know why didn't stop Nat King Coleand half the beetles. But so far I am keeping up and laugh in all the right places. Keep it up please!

The farmyard demands it's sacrifice!

thats a cute piggy, ofcourse Im Mexican and I would devour him in CARNITAS in a second... Hmmmmmm Carnitas: Fried Pork, accompinied by salsa, beans, and ofcourse TORTILLAS... man , I just got myself HUNGRY. Oh, nice comic by the way... O_o

I love you, I do believe.

I love you, I do believe.