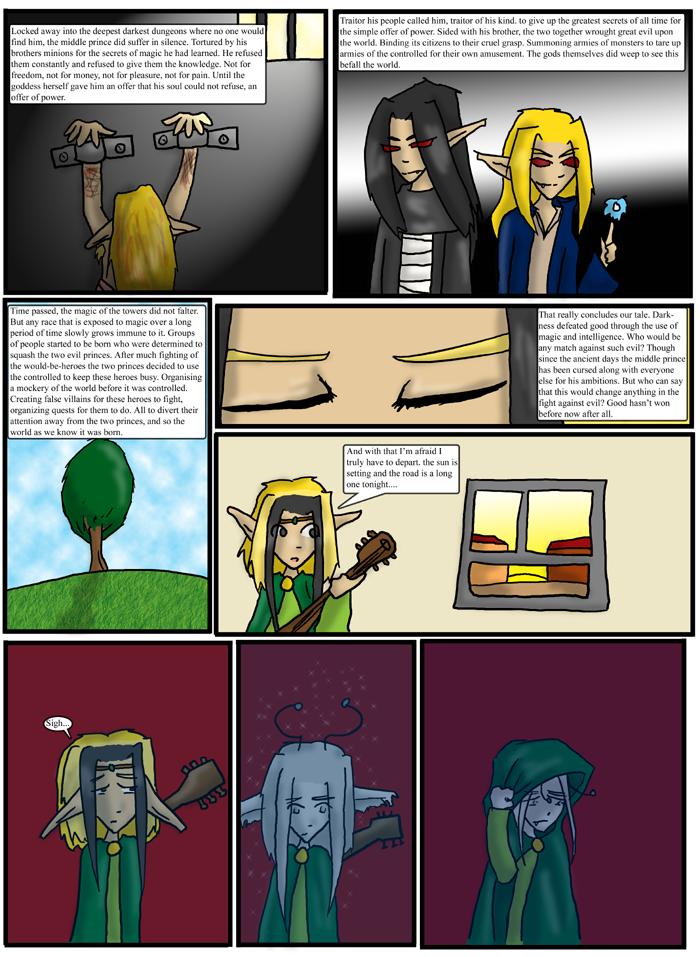 so yea, finally. end of the prologue! as it says Deme practically sold his soul for power. thus his not on anyones popular list. his known as a traitor because he helped his brother for power, nothing more or less. one brother corrupted for love the other for power. the lst bit of this comic is what i wasn't sure on. the youngest prince was cursed remember. he turns into his cursed form at night or in darkness. note his eyes in this form, he's quite blind. the elves that ran away were cursed and became depth elves. (no dark elves for you lot :P)a group of elves that are compleatly colourless (because who need colour in the dark? you can't see!) blindness, because you got no use for eyesight in compleat darkness. but they have antanies so they can kind of sence their way. bit like heat ray and their bigger fluffyer ears allows them to have super sonic hearing like bats! perfectly suiterable for the caves they ran away to. the gods clearly didn't want them returning to the surface world. only fault to their curse is that it kinda dosn't work in light. well at least not for the first depth elves like the young prince here. anyone whoes a kid from them are kinda stuck with it for life. but princey here turns back to normal during the day. but being a freak of nature at night is kind of depressing as i'm sure you all understand. i probably could have used dark elves, but i think my depth elves are cooler :P and less stolen. cause i made them up myself :P

your comic is totally sweet