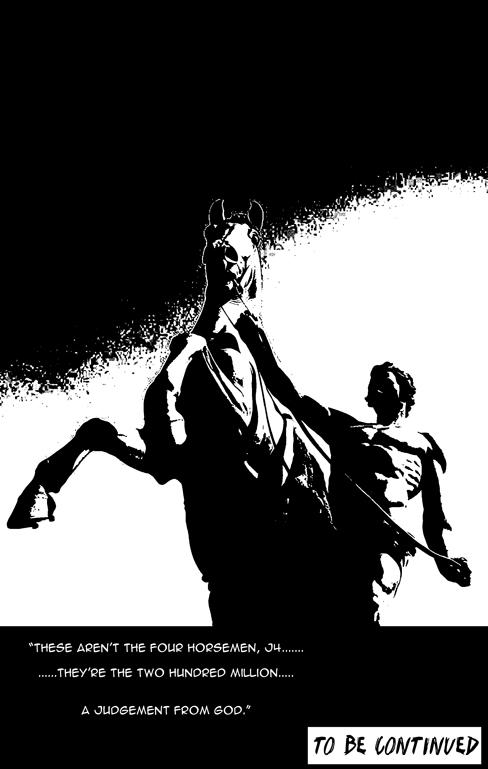 No this comic isn't dead and yes it is at the same time. I chose to take a break from it a long time ago. When the first issue was done I was extremely happy with it and thought the book would do very well. However, the artist, Robert Nazeby Herzig (who is an amazing illustrator), ran into scheduling problems (he does animation and graphic design in Italy). None the less I had to take over art chores. luckily some of the pages were done for the second issue already, however I myself am usually just paid to ink books. My pencils really we weren't that great at the time. So i chose to do a mixture of photo manipulation and painting with inks to try to get the book done. By the time the fourth issue was complete, not only was I completely burnt out on the book, but I also was very very unhappy with the way it was turning out (and from my understanding, most of the people that were reading it, felt the same.) I was trying to rush everything and it hurt not only the visual aspect of the book, but the story as well as I cut out many parts to just try to get the thing done, and i inadvertently sent good grammar and spelling to the bench. So I decided to stop the series then and there. Since then, I've done various work for other indy publishers, and have begun work on an all new project. My artwork has improved tremendously (no more photo manips) and the new story Im working on is much more enjoyable for me as both a creator and as a fan (especially since I enjoy zombies). I urge all of you to check out my new series. You can do a search here for a series called "Hunt the Dead" or you can visit www.huntthedead.com for more information. As for whether or not I'll pick this book back up and continue the story, I can definitely say yes, but as for when, I'm not really too sure on that answer. For now though check out Hunt the Dead. I'm sure if there are those of you who enjoyed what I did with New Nation thus far (crappy art from me aside), then you'll love Hunt the Dead. Thanks so much for you time and support. -Craig DeBoard www.huntthedead.com p.s. I got to reading some of the comments left here, and realized due to me being stressed out over this book I really took out my stress on a few people who commented. For that I apologize and I guarantee it won't happen again. The fact is, their critiques were right on the money and I was just so burnt out on the book and frustrated with how it was turning out that I really just wasn't being fair to anyone reading it, or commenting on it.

Wow, dude. Jump down omega5ooo's throat much? This started out as a really cool comic. I dig the story and really liked the art in the beginning. I have to agree with omega5ooo's Photo assessment, though. Part of what hooked me(and made me sit here and read the whole thing in one sitting) was the art...especially the rendering of New Babylon. I kept clicking, whilst reading, hoping that some of that art would return. The photo-manip-heavy style was cool when it was worked in with the hand-drawn art...but on it's own for so long, it looks a bit garish and made it hard to muscle through the last two issues. Somethings that really stood out (and I feel compelled to comment on after your scathing rebuttal to omega)were the numerous typos in the comic. For someone who claims such high prominence in the print and web arenas, you don't seem to do much proof-reading. Now, go ahead and look through my comics(as I'm sure you will, looking for ammo to come back at me with) and you'll find typos as well. Main difference is, I'm not tooting my own horn and praising myself from the mountain-tops whilst berating a reader because I didn't like his/her critique. If I may be so bold, what is your definition of "doing well"? I ask mainly because you make it a point to say, but the only reason I'd found your comic was from randomly hopping through the horror section. If that's not a question you feel comfortable answering in a public forum, I'd completely understand. The story IS good, but it jumps at times. Leaving the reader to wonder what they had missed...or if they'd accidentally missed a few pages. The pacing could be better, but it certainly isn't BAD pacing. On a whole, I did enjoy reading this comic, though. I hope that it's not a dead one, as I'd like to see how this ends. There are quite a few of these "During the Tribulation" comics, and this one has the potential to stand out a bit from the pack.

Love that imagine, its so atmospheric!

And I DO certainly think that photography is art (in my profile page there is a link to my work), it's just unusual to see it used in graphic novels/comic books, which usually feature "completely hand-made" work. But again, a matter of taste.

Ok, I honestly apologize for assuming something without asking about it and basing my critique on that and also something that should probably be considered a matter of taste. However there is one thing... Just because my comic may not be as succesful as yours, or because my skills might not be at the same level yours are at, doesn't make my critique worth any less. Yes, misinformed and partly driven by personal taste but it really just seemed to me like you had lost motivation with the comic and I wanted to encourage you to pick it back up again. I am glad to hear you still have it though and wish you success in the future.

Sorry about that comment, I misread some of your comment. Some of the art is photo. Other parts are done in brush and ink. I use whatever is nessesary to capture the image I am looking for. Hope that answers your questione

OK look, you have no idea how I do or don't do my artwork. So next time how about you ask instead of assume. Plenty of the artwork is done by hand and I work very hard on it. And some is photo work. But I guess you would say photography isn't art, right? Wrong. I use whatever tools are nessesary to capture the right image. Be it a crow quill, a photo I take, or shit, I've even used ciggarette ashes for gray tones before. Sorry kid, I've been doing this professionally for well over 5 years now. Do some research next time. I don't mind a harsh critique. Really I don't. In fact I enjoy them. But I can't stand an uninformed one because someone was too lazy to bother to ask a simple question, as opposed to just posting an assumption. As it stands right now, my book is both in print and available on the web, and has done very well. Can you say the same for yours? Because there are plenty of others whose work is in print and it's selling well and they enjoy my book. So regardless of your comments that you've made based on know actual fact-finding information, I would say it's just fine the way it is. But thanks for playing.

Well, this comic started out interesting enough. A modern take on the most interesting book in the bible (at least it has always been to me) in a spiffy Hellboy-esque style? Although the story-telling wasn't quite as fluent as it could be, I was definitely hooked and continued reading. But then, from Issue 2 on, suddenly all we get are (manipulated) photographs with a Photoshop filter applied to them (at least that's what they look like)? Some people may like it styles like this, but to me the new style feels lifeless and rushed. Are you in a hurry to finish this story or what happened? I hope you don't mind this criticism, but I wanted to be honest because I think that you could really improve this comic if you tried.