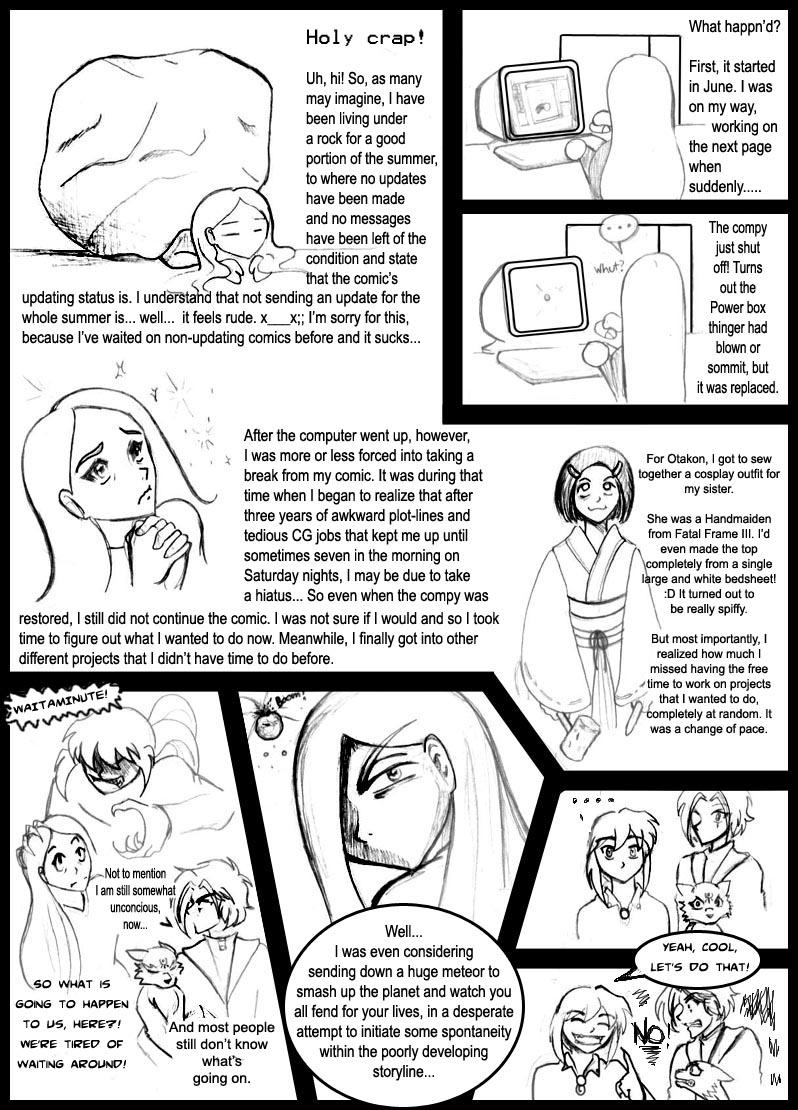 These notes are a continuation of the explination in the comic page above. I did get the computer fixed, but the off-time allowed me to see just how much of this comic I was not particularly satisfied with. In essence, I'm not sure what to do with it. To start it over? To give it a hiatus? To continue at all? The plotline has been bothering me horribly for a very long time, as I'm most frusterated with its *at a crawl* pace. There is still so much much more I want to show with the comic and so much background that has been horribly neglected. Nomed, Ruethin, and even Indy, are great characters to me and I could not simply drop them off the face of existance. So, the most likely thing I may do is give the comic a hiatus. During that time, I might scrap the origional script/storyline I had planned out and re-work it, starting from this very point where I've left off. There may be very few updates for this comic, during this time.

Also during that time, I'll be working on other artsy projects, maybe to reawaken some creativity within myself. And who knows? I may infact surprise everyone with a completely different comic series all together. I do *not* want to abandon OBQ. Not after three years worth of this stuff! But I may need to take a break from it so that I can rekindle my attachment to it. As insane as it may sound, it's been three years since I've started this thing. The storyline struture needs so much redesign that it's insane. @ @; So when this thing starts up again, perhaps there will be some interesting directions I can take it instead of the ones I've had planned.


How Long Will The Hiatus Be?

At forefront, I'm not certain. But I might count on quite a while. Perhaps maybe even a year. ;___; I am very sorry to those who are reading. I just think this comic could do so much more and be so much better. I need to brainstorm and figure out how to pull it out of its grinding rusty gears. If I can do that, perhaps it'll be well worth the wait.

I will still be lurking Drunkduck and commenting on other comics, however! Maybe I might even start drawing more fanart for people…! *who knows*

I'm starting my fourth and final year of college (scary) and at this point, I'm not sure how busy I'll be. But we'll see how things go. Getting so close to that point where Life will officially begin. @ @;;;; Scaaary!

So, I think that's more or less all I've wanted to say, to those who find this update. Ye may all see mah face again, sooner than you think.


Meanwhile, speaking of FanArt…. I recieved a piece from Jenshin! XDDDDD *totally surprised!* Thank you so much! This is really awesome, so you must all see it! 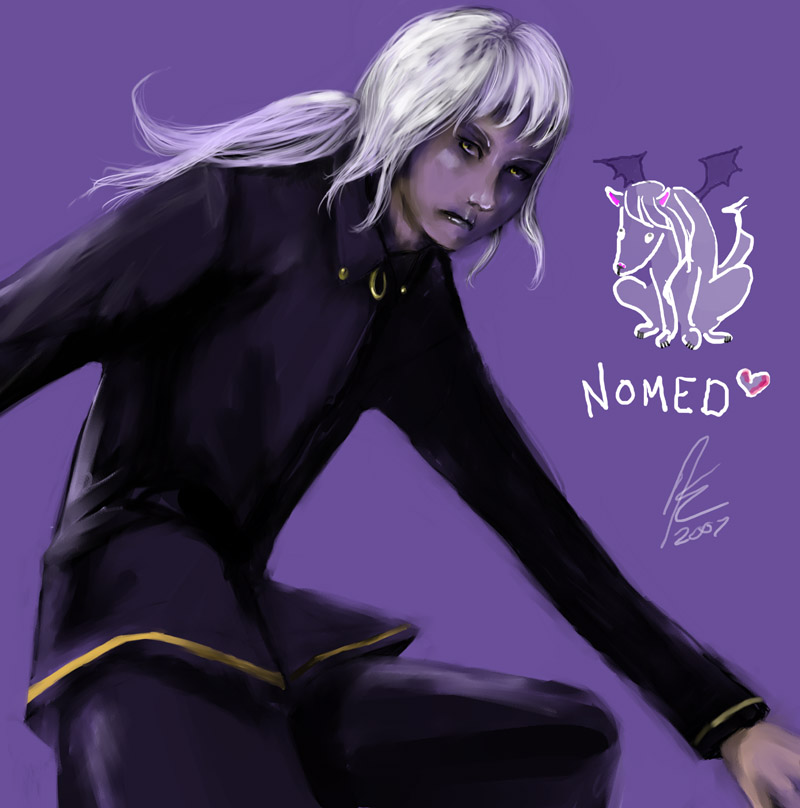 Everyone, I'll see you guys around! *and I will leave comments on your comics!* Ciao for now, guys!

I hope you start updating again soon i love your webcomic

I'm glad I looked up this comic again. This may have been updated last year, but still, I really liked it when it was going. n.n To the favorite mobile!

Hope you will be able to update soon.

Awww! *hugs* M'sorry that you've been having so much trouble, man. But seriously, if you need to feel free to restart or whatever. I will very happily read anything that you post, whether or not it has Nomed in. (Though it'd be neat if it did. ;) ) Good luck in college too, man. ^^;; Scary stuff, it is. Anyways, Nomed once again is absolutely adorable, both in the filler and in Jenshin's crazy-good fanart. ... *hug* M'so sorry for taking so long to review your stuff, by the way. T_T Forgive meeee.

I completly understand what you mean ... so if youÃÂ«'re not satisfied you should really take that break and think things through. Good luck!

or start something new... :) (I started on a new comic tho) Havent seen any action from you in awhile. lol

I know that I must find an alternative way to produce pages to get through slow parts, a little faster. But changing the style of these pages would bother me. ;__; It sucks being picky, eh? _xD honestly I wasn't too sure of how many people were actually interested in seeing what would happen next.... I shall be meditating on such matters during this break. xO

Oohh, lots of stuff happened in your life. Hmm... Well in a selfish way, I really want to know what happens next, so I'd like you to continue the story rather than restart it. But then again, I've felt the same way about some stories of mine.. sometimes redoing it is the only way to feel good about it. I think the one thing that keeps me going doing Two Moons is that it's easy to crack out pages. I mean look, I only use two colors, and nothing's inked.. So even the boring parts go by quickly. So, maybe rethinking your method might work for rekindling your passion.

nice to see you back. I'm getting tired of my comic too. (Maybe cuz I'm working on cars frequently now...) It happens. Give urself a break. Then start up something new...

Glad you're alright! I hope that whatever choice you make will work out well.

holy crumb cakes! well, that sure explains it. but hey, you gotta do what you gotta do. and when you come back for good, we'll all be waiting for ya. and welcome back :)

Welcome back. As to whether to start over, how to work on the plot. . . that's something that only you can decide for yourself. You are doing this comic to please yourself foremost, and us second. Don't churn out something that you'll end up hating! Jen's doggie Nomed is the most disturbingly cute thing that I have seen in a loooooong time.