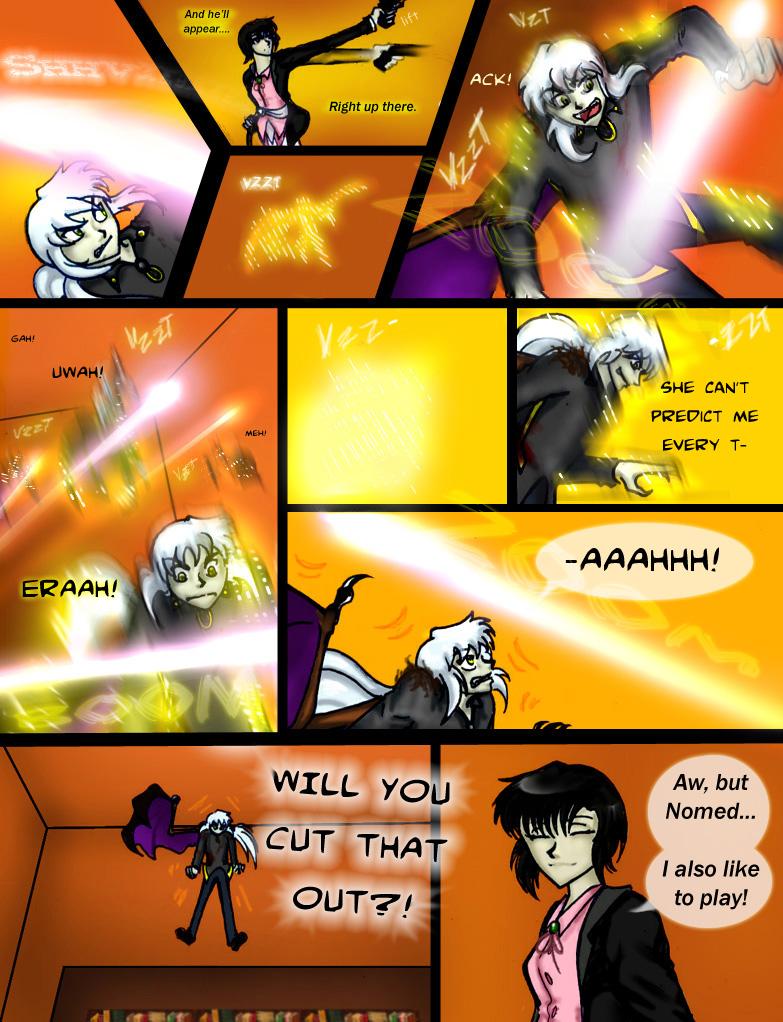 *Yeah new page. DDDD: After all this time and it's so quick and short…*

The school semester is OV-AR. Which means I might actually be able to concentraite on pages a little more… D,: I'll give it my best!! Although I am also gonta try for a part time job over the summer. At the moment, things are up in the air. @_@;

Thanks for sticking around, those who have. D'x I needed a mini-vacation or sommit, maybe… also had to deal with finals and the lot.

Hopefully things will become a bit interesting for a while. *darts eyes* Stay tuned. :3

*Did anyone see the new Pirates of the Caribbean movie? xB*

o____o!! Eek-gads, have a few not seen jokes about the author being tied or chained to their computer in order to get comic pages done, before…! *eep!*

XD Nice humor in this page. Poor, poor Nomed. Ee! I recognize some of the picciatures from the filler update. Especially the first panel. Man, I love that first panel. Nomed has a great expression in it. ^^ So cute. I like how you did the light in Hyme's hair too, btw.

YOUR POWER SUPPLY DIED! Just replace it. They're cheap ($25-30)and easy to pop out - usually a few screws to the case and that's it. Just make sure you get all of the cables put back together in the same order.

I just noticed something about Nomed. this: Nomed-Demon. He, that's cool! Inlad The Dashing Paladin.

Been a while... It's hard to keep up with comics when ya don't have the internet at home. But I'm going through them one by one. So nice to read this again! I love Nomed, he's so cute.. I'm gonna have to do some fanart someday. Keep up all the good work. Wheee! I will always keep reading, even if you don't hear from me much.

That's a very dangerous way to play ..... I'd rather challenge her on the game she was playing before.

OMG that was so aaaawesome!!!! wow, i mean that was just all crazy like the only way the awesomeness of those pages could be matched would be by chuck norris becoming POPE

im back, havent caught up reading yet, but looking forward to it...tell you how it was when im done!

@ @; [b]For those checking:[/b] I have no idea what happened or why, but my computer at home shut down on me (I am using a library computer to type this right now). My computer at home just randomly turned off and now, three days later, I still haven't been able to get it to turn back on. I have no idea what's wrong with it, or what it'll take to fix it. I do have an older computer that could hook up to the internet, but that computer is very old and very slow. x x;;; I don't know what to expect or make of this;;; But it looks like I won't be around Drunkduck for a bit, nor will I be able to even work on my comic. DDDDxxx *great* Need to contact some computer savvy family members. x x; Until then, I don't know how long it'll take before I'm back online again... Wish me luck. x x;;; *answers comments quickly, for now* XeaRi: Aye, they are gunshots, so they must be bright! :3 Wazaga: He is thrown off, because men and women tend to have different approaches to fighting... *least I believe they could, on average* Draco109: Dx Well, to somewhat send out a spoiler for the next page (who knows when that'll be up) they end up in a stalemate. Hyme can predict teleportation(sp) and that's a disadvantage for Nomed, who tends to use that quite a bit to confuse enemies. Mina_Lunga: I think I can see what you are getting at. DDDxxx if I could continue to update, maybe the random comedy-esque stuff would blend in better. It does go back to serious again, as Hyme starts digging around Nomed's psyche. = =; Yes, my computer dies on me *RIGHT* before I get into that. I swear there is some higher power at work here... Though I do think there could be better blending between the mood of this page and the ones in the past. @ @; Reh... I prefer honest critiques over anything else, so thankye. :3 kyupol: You think so? :3 Dx okay, guys... I'll see you all around. Take care.

She'd be a good school shooter....

It's funny and cute, but this page does really interrupt and destroy any crescendo that you were building in terms of serious action. I don't know if you would always want things to be cute or always serious, but having them break into one another I think breaks the story here. Then again, I'm also slightly drunk, so you might want to disregard my rambles. Welcome back, and death to finals!

So many shiny lights... O.o I want to see PotC 3. Meh, take your time updating. I myself prefer having a schedule, but whatever works for you. I promise I won't break out the chains. ;)