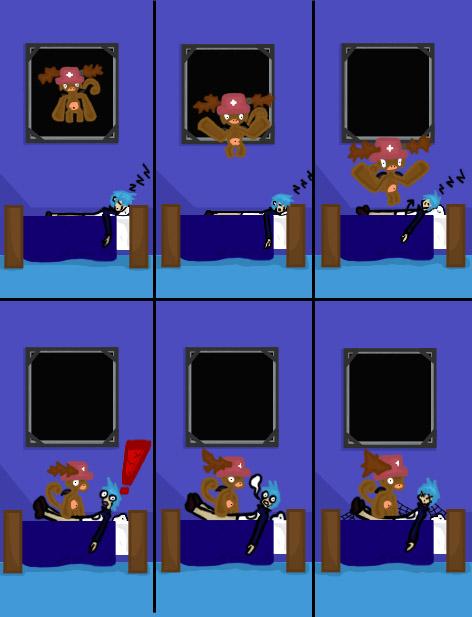 Page 29 xP Don't have much to say about this page just that if you don't know whats going on well it's kind of homage to Winsor McCay (hint hint) also why the antlers keep changing well thats just the magic of the Tony Tony hat.^^' Thank you all for reading and your comments, thank you so very much!

@-ximerika: I'll take you up on that offer one day but for right now i'm trying not to use any fillers, atleast not until after pg.35 xD

@- Azaeziel: she thinks that because she nows him so well, she nows that he tends to daydream and sometimes when your daydreaming you accidently set the office on fire and you know get fired…

@-kawaiidaigakusei: yes she is a very strong person who is not afraid to say what she wants.
About the movie, I didn't really like it. I didn't know who anyone was and what kind of relationships they had with each other and it was kind of hard to tell. For example when harry wants to go save his godfather they tell him its a trap and he snaps at them saying that his godfather is the only family he has left, I guess he doesn't consider his friends family?but his frineds must of because they were always trying to help him out and spent x-mas with him I thought they must of been like really great friends but I guess not. I don't know I think the moviw was really made for fans and for people who have atleast seen the last movies.

Hi, I am Teddy. Once you read this you cannot get out. Finish reading this until it is done! As I said, I am Teddy. I am 7 years old. I have no eyes and blood all over my face. I am dead. If you don't send this to at least 12 people I will come to your house at midnight and I'll hide under your bed. When you're asleep, I'll kill you. Don't believe me? Case 1: Patty Buckles Got this e-mail. She doesn't believe in chain letters. Well, Foolish Patty. She was sleeping when her TV started flickering on and off. Now she's not with us anymore. Ha ha patty, Ha ha! You don't want to be like Patty, do you? Case 2: George M. Simon Hates chain mail, but he didn't want to die that night. He sent it to 4 people. Not good enough George. Now, George is in a coma, we don't know if he'll ever wake up. Ha ha George, Ha ha! Now, do you want to be like George? Case 3: Valarie Tyler She got this letter. Another chain letter she thought. Only had 7 people to send to. Well, That night when she was having a shower she saw bloody Mary in the mirror. It was the BIGGEST fright of her life. Valarie is scarred for life. Case 4: Derek Minse This is the final case I'll tell you about. Well, Derek was a smart person. He sent it to 12 people. Later that day, he found a $100.00 bill on the ground. He was premoted to head officer at his job and his girlfriend said yes to his purposal. Now, Katie and him are living happily ever after.The have 2 beautiful children. Send this to at least 12 people or you'll face the consequences. 0 people- You will die tonight 1-6 people- you will be injured 7-11 people- you will get the biggest fright of your life 12 and over- you are safe and will have good fortune!

You know that is a bit scary but it reminds me of Chopper from One Piece. I love it when animated things come to the real world.

Cool. I've never set the office on fire myself, but I can see how that could happen... Dunno who Winsor McCay is, but I get the feeling that this is a dream sequence of some kind. Lookin' Good!

It's the oddest homicide iv'e seen yet