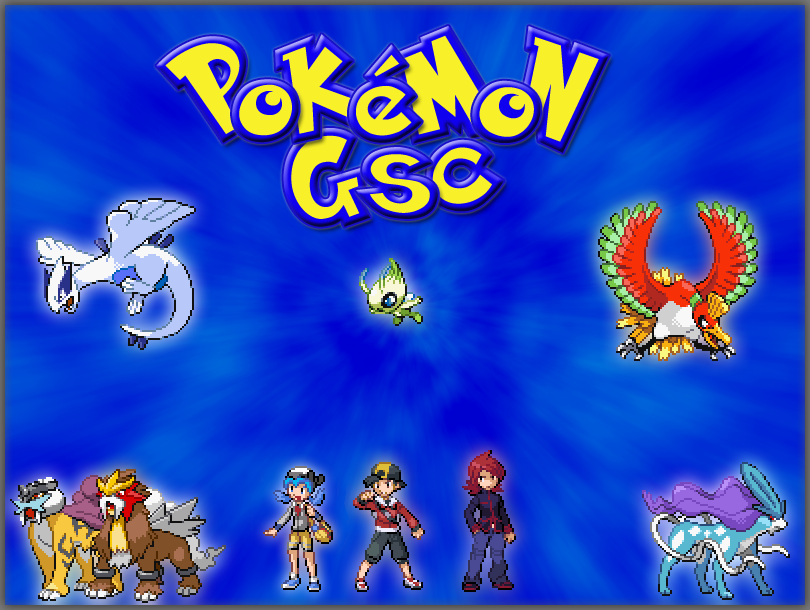 SOMEWHAT similar to the teaser I put a couple days ago (that was updated with better text thanks to Kevin btw, go check it out.)

Next two weeks' updates are already done, so no worries to anyone who thinks I won't update this week or next. Worry about the week AFTER that though.

Original Author Notes
Yeah, I remade it again. I think I may have overdone it this time.

For the Pokemon sprites I used the Diamond/Pearl sprites for all except Celebi, I used R/S/E's sprite for it because Celebi's D/P sprite was really awkward, I mean.. find it and look at its arm… o_O; Besides, with the R/S/E Pose it was much nicer anyway. I thought at first the Legendary Dogs wouldn't fit in so I was a little worried, but they actually fitted into the page quite nicely. Also, to fill up some empty space I put normal sized sprites of the evolved starters our trainers got.

Also, don't worry about the next comic, GSC #37 has already been made, I'm just waiting for Kevin to finish the Photoshopping on it. :P

So for now, an unexpected update!

No shit it's unexpected, you hardly updated in the first place so even an update on Saturday was unexpected.
Your ad here, right now

Anyone who is curious, there should be an update tomorrow and Saturday (seeing as they are both already preset to update).

Well, you COULD pay for it now and get it done now and not upload it until later. :V Surely you jest at not having the knowledge of all future caught PokÃ©mon and/or new characters.

Indeed I do Kev, although I prefer to maybe wait till I get past Slateport City, so I have more to update the character page about. :V

I just sent him the next two lettered already :U

Well, you know the deal, Petah.

Which reminds me, I want some HG/SS Pokeymanz for my char page too. =[

FFFFFFFFFFFFFFFF- Was going to say "since you have me updating the character page anyway, if you throw in a 5th guest comic, I'll make the logo more like Petah's" but I guess that's pointless now :V

I like the white hat + red bag, although the red bag could use a darker shade in it to stand out a bit better.

ok so like i took what you had and i edited it a bit using swimmer hat + pigtails and took the colors and changed them a bit. [img]http://i33.tinypic.com/6joec9.png[/img] :'c White hat with redder bag, white had with pink bag or yellow hat or none :'c

If could make them, that'd be fantastic. If you want a reference (sorta), here's the sprite I made facing down. [IMG]http://i319.photobucket.com/albums/mm466/NovaManXP/HGSS-Crystal-Front.png[/IMG]

ah you still wanting crystal revamps? I could attempt some :'c

Not until all the comics have been revamped. I'm still using them technically, so I have to give credit where credit is due.

You might wanna get rid of the "Revamps of johto made by gridiron" on the bottom :'c

Oh yeah, revamps will be coming on Fridays (this excluded, since it doesn't really count), and main updates on Saturday. That is all.

Great cover, you could have put the main characters' starters there but oh well