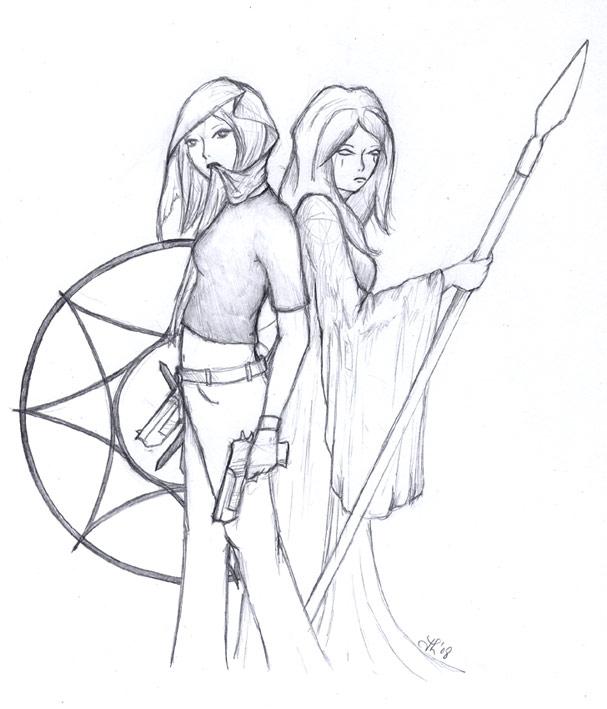 So I totally missed Monday's update. :( Sorry. I had to do something and then I got a call about a job interview. So I spent my time spiffing up my portfolios instead.

One reason why I like scanning my art is so I could spot mistakes easier. I think I messed up with this sketch which is too bad. :S I know the girl with the guns is messed up.

Who might these ladies be? Why have me tell you when YOU could tell me! If you can guess who these people are (and thus proving that not only do you have good taste but that they actually resemble the characters I was going for) then I uh, draw you something? If you guess correctly, send me three choices and I'll pick one of them to sketch for you.

Here are two hints:
1. This is a fanart sketch for a comic found on DD.
2. I only added the head scarf because I really like Blade of the Immortal's Maki~ The actual character doesn't wear that.

As a side note, I have not forgotten about Space Waffles~

Did I mention I met James Jean on Sunday? Did you know that this whole thing was typed up partly by my right hand? The same right hand that shook James Jean's hand? ZOMG! I even got sketches from him! Watching him draw them was a total art orgasmic experience. He is THAT good.

He's such a nice guy~ I hardly ever act fangirl-ish but the very thought of that day makes me squeal with girlish glee!

wow thats really good. i was just browsing comics, yours has excellent drawings

Damn... I don't know -_- But I like the idea of the two gals with different weapons here, old and new. And the scarf in her teeth is really cool too ^_^