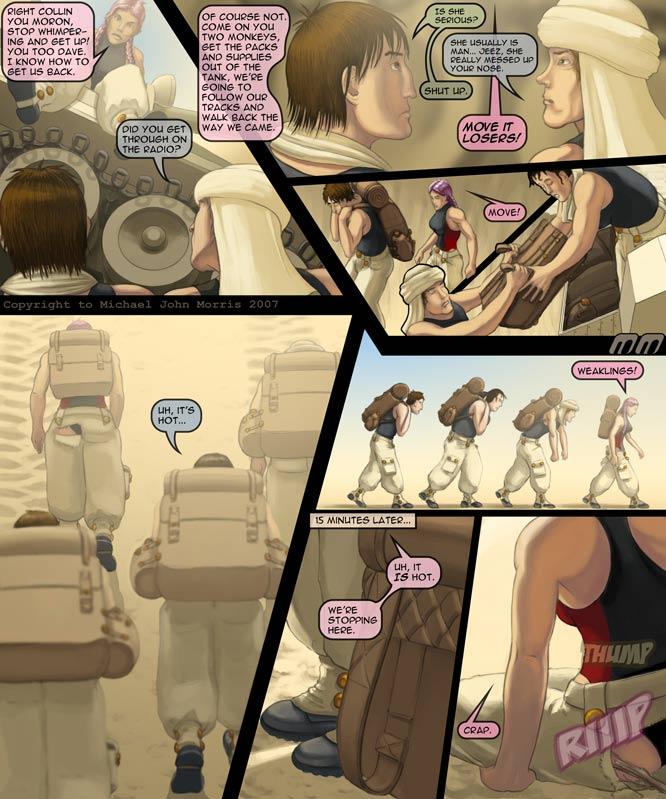 Page description:
Pinky Tells them to get going and they do. They remove packs and water from the side boxes on the tank, walk around the ridge and get on the tracks of the tracks! They walk for a bit and complain about the heat. Pinky tells them off and then decides it really is too hot to keep going, (their bags are bigger). She flops down and rips her pants again, on a dead branch this time.

Commentary:
This one was much easier to colour, maybe I've got my Mojo back? I even did a couple of blurry shots for effect here just to try something different. I had a great simplified colour method worked out here too, that was nice.

-Two great new Pinky Pics this time! One of both Pinky and Cc done with Gial as cute chibi avatars by Aurora Moon! And a valentines pic by Wingnut of Aquired taste! Pinky gets flowers ^_^.

OMG! You bastards! So many comments to reply to and I'm so late doing this that no one will actually read them anyway. Ah well... [u]replies[/u] [b]Zac[/b] - Cary boy! [b]Sub[/b] - NO! [b]Ham[/b] -heh!That's my fave panel too! [b]Brogan[/b] - Thankyou man! [b]Rydel[/b] - Heh! A motorbike maybe. A pushbike won't work in that sand. They'd look cool on motorbikes. [b]F Allen[/b] - Thanks man. [b]Silus[/b] - You're still around man!!! [b]Digby[/b] - I love your name. It sounds very English, old fashioned and rural in a charming way. :) [b]Jenshin[/b] - You're right, it made pinky do strange things to her pants! Heat makes tempers flare even more as well. :( [b]Vinomas[/b] - Thanks! Glad to see you back here vino! [b]I hate Dirt[/b] - TY [b]Nick[/b] - Hahahahahaha! Yeah, you're a dirty bastard. [b]Polarmagnet[/b] - Awwwwwww! And they didn't fix it back to how it was? Why? Ah well, I'm sure you grew into the different shape and made it look good anyway! [b]Kristen[/b] - Ha! That'd suit Pinky fine! Hahaha! She only wants to dance with men anyway ^^ Still, maybe that explains why gals didn't like my cool jeans with all the patches I used to wear :( [b]Glass[/b] - Thanks dude ^^ [b]Kam[/b] - TY [b]Mad Mazza[/b] - Hahahaha! That'd be true. Ouchies...Yow. Poor Pinks... [b]Sarah[/b] - The Weaklings panel is my absolute fave! Pinky is exactly like me as a leader. ^_^ Naww, I'm hypocritical like her, but not lazy and mean if I lead people ^^ [b]Alej[/b] - Hahahahaha! Sand in a gal's bum crack is funnier than a man's ^^ But you're right about those tracks damn you! You see way ahead into the hidden recesses of my story! It must be Lola's glasses in your avatar giving you magic eyes! [b]Rana[/b] - That's exactly the right response! [b]Einkun[/b] - My mojo went and died... :( He, 15 minutes, To short! [b]Green[/b] - You're right, she's fricken HOPELESS. But I've just been listening to a radio play of Evelyn Waugh's "Sword of Honour" Trilogy about his experiences as an officer in WW2... Apparently Pinky's not too far off the mark for a real officer. Scary thought! [b]Mustard[/b] - Hehehehe, they never made them as funky as these! Ah, Pinky has no need of a kit when she has imagination and a sharp combat knife! [b]Magical[/b] - What makes you think they'll last until night? ^_^ [b]Eunice[/b] - I did then... and the next one took ten bloody days! In between other things... [b]RadmetalMohawk![/b] - You flamer! [b]Shane[/b] - Ty man. [b]Aurora[/b] - You have it right on as always Tanya ^^ [b]Darwin[/b] - Heh, Miles indeed... ^^ [b]Phantom Penguin[/b] - ha! Indeed! You'd know 100000x more about the big heavy metal stinkbeasts than I would too! As well as the Desert... All the deserts here are the dark red of old dried blood, and the sand is so dust fine that it packs as hard as rock... [b]Sapzzzzzza[/b] - Ty man! [b]IAGOJESTER![/b] - Last one wooooot! It's the young Pinky remember ^^ She has a lot to learn (especially how to wear cool pants), she's young and callow here, selfish, lazy, and stupid. But she won't always be that way ;)

yay! they're on the move hopefully we will see some action.maybe sand marauders

What can we say, you're the man ozone. Sharp visiuals I like the shot "weaklings" It looks nice between the other panels.

You captured the heat very well. I'd kill for a bike if I were one of them.

Man...it looks hot on that page.

I'm not sure if stopping is going to do them any good at this point... Walking through the desert must NOT be fun.

i love the purple tinge to her hair in one of the frames.

will a sand storm rip the rest of her clothes off or am i just being dirty?

Yes, I have a broken nose too. I had the cutest little ski-jump nose until grade two... when I fell on my face... playing ice tag. ...I was a stupid kid.

ripped pants?! reminds me of a song I know... "and no girl ever wants to dance with a fool who went and, ripped his pants."

Aw man, poor Pinky! She's just having a rough time of it. Having your pants rip not only sucks because your pants just ripped, but that sand she's sitting on must be burning her bum!

Haha, I like how Pinky goes "weaklings!" and then "uh, it IS hot". XD Spoke too soon I suppose. I actually like the two panels of the group walking the best.

Man, unlucky. hopefully the wind hasn't blown away any of the track marks....'cause that would suck almost as much as all the sand that must be going up Pinky's butt-crack.

They just don't sew those combat fatigues like they used to ... And I'm sure they didn't pack a sewing kit! ;-)

deserts do tend toward hot. But its ok wait until tonight

I would have to agree with Iahojester... but then again, this is a pretty bad day so far for her so no wonder why pinky's in such a foul mood!