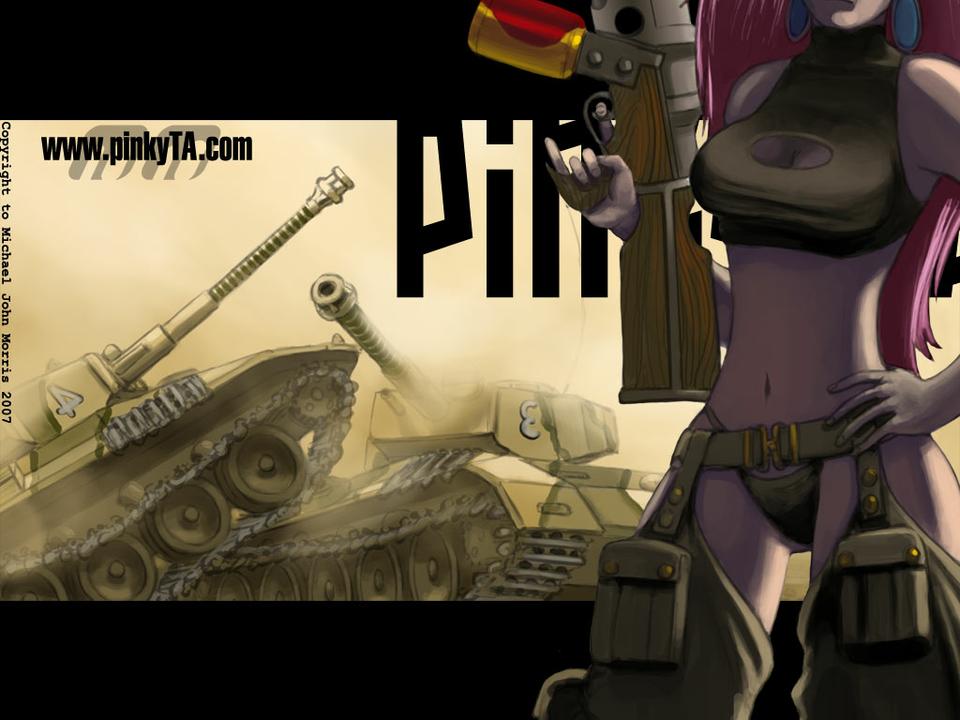 Yet again I'm LATE!!! T_T Dammit! I dunno what goes wrong, I'm just so tired at the moment, it makes it hard to work for too long. Anyway, The other day I got bored and made a few wallpaper pics for Pinky TA, this is one of them. I dunno if anyone would want to use them but I made them anyway… you can get 1024x768 versions by clicking on the thumbnails in my Pinky Gallery, and 1280x1024 versions by following the links when you look at those images, like this! ^_^

I'll replace this pic with my comic page when I actually finish it, so please check back if you want to see the comic. Maybe is 12 hours time. Oh and SORRY for the spammy look to my template here but I thought I may as well go with the whole ad thing… Hopefully I can make it look nice with my site here, and some of those really good comic ads actually make things look better! Purgetory Tower has a nice one and so does Lizzy.

So is tank sex like safe sex? Or just armored sex?

Huh- It cut off the rest o' me comment! i had said- awesome tanks! And I love the woodgrain on the gun, and the backlighting is terrific! jeeeeepers! I would give you another five but I know it wont let me! ^_^ ~B

Stunning work! Your tanks are amazing. As fer Pinky- where does she get her waxing done? ;-)

nice. this is my wallpaper now.

Your probably have the best layout on this site, so I wouldn't worry too much.

Thanks guys. She has an extra finger!!!!! As Andrew Nome kindly pinted out. See a fixed version [url=http://www.nightgig.com/ozonex/image_pages/pinky_art/wallpaper/wall1.htm][b]here[/b][/url].

Now that is freakin' loverly!

check back? awww man, Im way too lazy to do that :D Thanks for the wallpapers, I change mine almost every so at least I've f ew days covered of the year now :D

Heheh. I can think of a few people who would jump to this wallpaper. Very well done indeed ;)