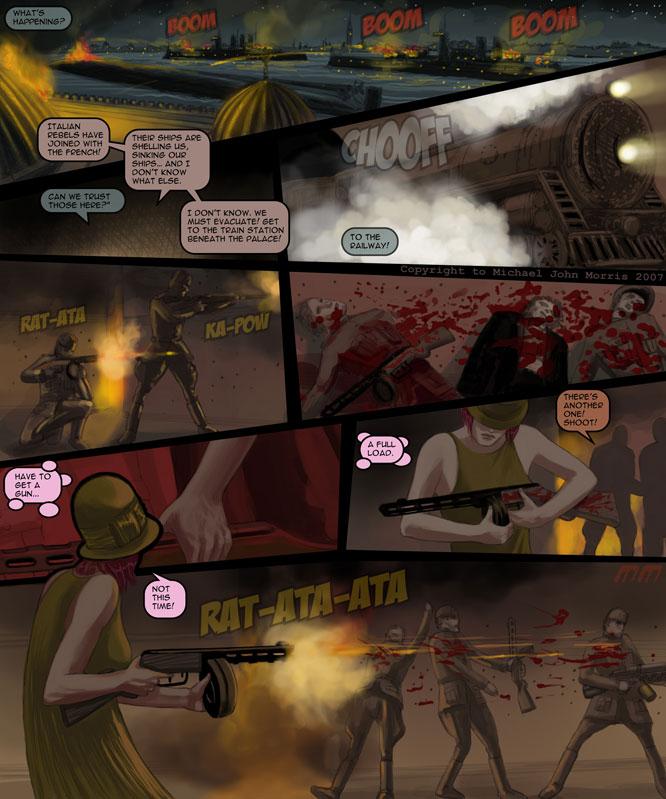 Page description:
Elements of the Italian forces have rebelled and have joined with the Crimean's enemies, the French. Italian ships are shelling those of the Crimean's, along with the Libyan palace. Inside the palace chaos is rife, loyalist and rebel Italian troops are fighting with each other as well as the Crimeans. Those who can are escaping via the subway. Pinky emerges from the chaos and finds a weapon to defend herself with.

Commentary:
This should be spot on time as well since I finished it on Sunday! If you're confused by the story here I hope it at least looks exciting. That sub machine-gun is yet another anachronism, but the ppsh-41 is the perfect looking weapon for Pinky, especially with that dress. …I NEVER liked Tommy guns either, so the ppsh-41 is MUCH better.

Ah well, Pinky's popularity has suddenly curtailed… I'm not sure why, but there it is, it had to happen eventually. And I'm not so sick anymore, which is not bad. It tastes a little like blood when I cough, but I'm coughing a LOT LESS! Plus, that seems the only aspect of my illness that I still have, so it's all good ^_^

Feature
Kim Vilimek, who I used to do some collaboration with on Pinky TA ideas in 2000-03, has put up some Pinky TA stuff on her comic here at DD: Side Note. She also has her own comic here called Hexx. Check them out. ^_^

The curve of her dress against the straight-line of fire is just... ... beautiful. ^_^

I like the perspective. I'm a little shocked I never came by before.

it is very exciting ! i realy like how you play up the gore aspect of war, that is exactly what people need to see now , not the collaseum red sands of the history channel !!!

This so deserves to be a first-person shooter. Let'er rip, Pinky!

Heh, yep Gillsing. The PPSH-41 is a design that never had a second pistol grip, starting as it did as a German design in the 30's. Later the Russian version with the Finnish Sumi Magazine stayed much the same- no extra grip. The hold on the magazine is well known with this model and evidently safe from the pics of it being fired that I've seen as well as the youtube vides. Heh, I did my research here! ^__^ [url=http://www.youtube.com/watch?v=zM1_wmPOrbo]This[/url] one has a good view.

I have been taught that one should never hold on to the magazine when firing a submachinegun. But I guess some guns may be designed for that? Or perhaps designers only later figured out that they should equip the gun with something to hold on to that is less likely to jam the gun. Like that second pistol grip on a tommygun.

I don't think anachronism's are that much of a bother in Pinky :) Glad to hear that you're feeling better, although tasting blood when you cough still doesn't sound all that good...

Amazing! That dress makes it even better hahah

Reminds me of those Philippine action movies I keep watching... :)

=) she's going to ruin that dress

Bloody page! If for some reason Pinky TA is made into a video game, it should be a first person game... this page just reminded me of Medal Of Honor 2 on the PS1! Still, this is a very... I mean VERY GOOD page!

(OO) awesome page! REALLY like the last panel how she braeks the boundries of the frame while still being in it !!! ROCK ON MASTER, ROCK ON!!!

frame five and eight are awesome.

Excellent cityscape in the first panels! It had me staring. I also like how Pinky bounces into action immediately.

Things just go to hell around Pinky don't they? I mean really was she born under a bad sign or what?

Action! *_* Looks great! I really love the first panel in particular for some reason, the ships look really good.

Sons of bitches must pay!

Deadly even in the daintiest of dresses!

That woman is violent!