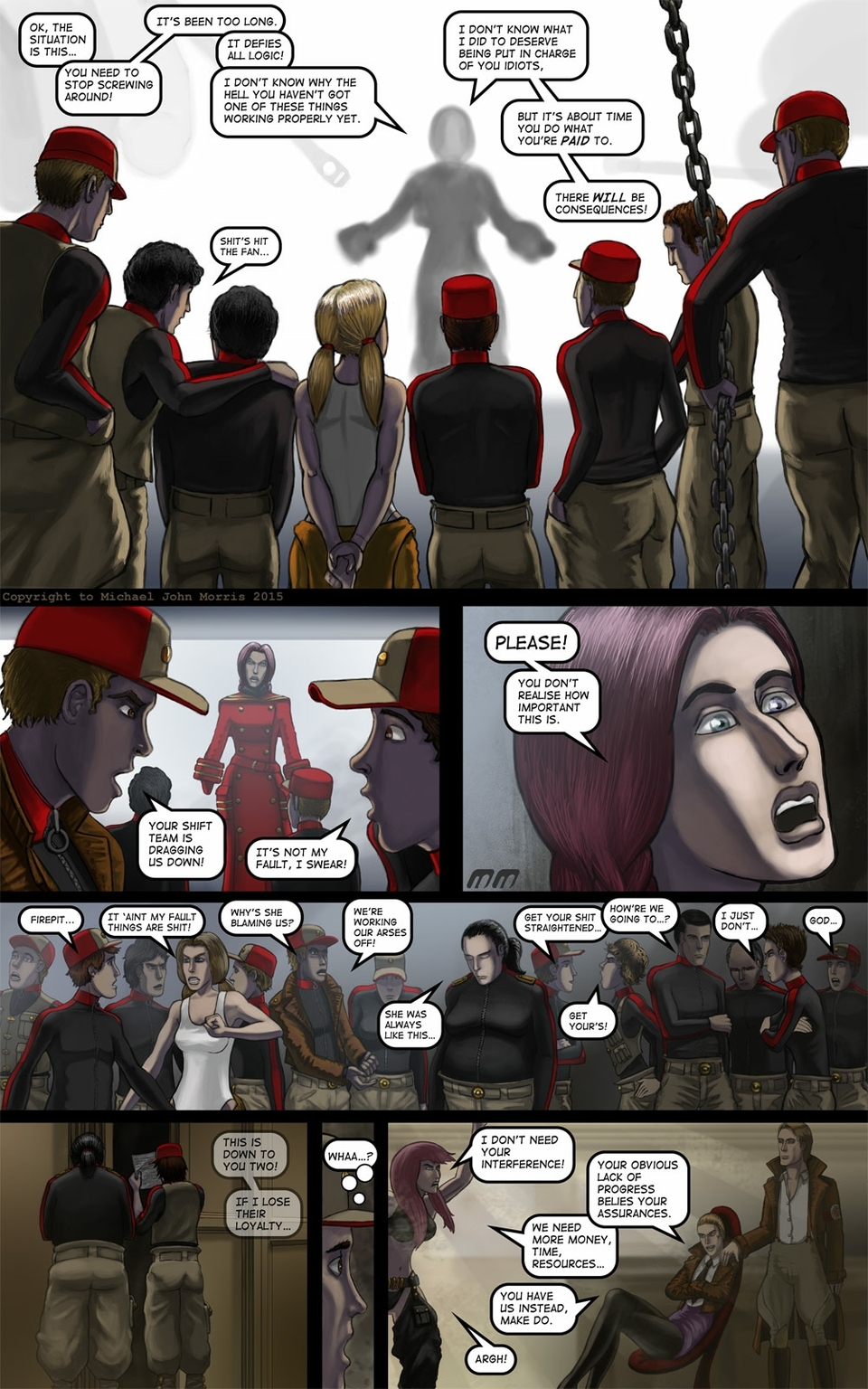 Page description:
I don't think Pinky is a very good leader… She explains the situation to her troops, but they don't really know the full story behind the scenes. Ace and CC are along here to “help” out. Don't you love it when the response to a crisis by those in charge is just a change in management?

Commentary:
I really do not like the stylised, cartoony way I draw faces and figures now. It's probably time to start drawing my stuff on paper again to get the style back in gear and speed up. Tablet drawing has made me lazy as balls. I mean, look at my sparse backgrounds for the last few pages, the angles I draw etc… lazy, and none of it is about time saving.

Amazing panels of costumes, lighting, and people. So cool!

Hahahaha! I thumbnailed a few pages and then stopped and started writing them out in a detailed fashion, describing what happens in each panel, and then devolved to stuff like "and in this page they have a fight". So I'm not very good at that stuff.

I just noticed that the preliminary sketches for this page date back to September 25, 2013, according to the Pinky TA facebook page. Now I am wondering if the entire chapter 8 exists in thumbnail sketches.

backgrounds are a hard thing. It's always a balance between being too busy or too sparse.

Thanks guys! Maybe I was a bit hard on my style, but yeah, I could definitely benefit from more life drawing at this stage. Thanks too Kim for the correction, I'll fix that!

I do like your current style, although I think your older stuff had a slightly more unique, angular style.

and get yer SHIT together, firepit! gaw!!

Aie, I know what you mean,man. I've been there a few times myself! You just kind of become dispondant about your art and go through the motions until maybe you find a more dynamic way to go aobut it! Hey, sometimes what I like to do is go on Deviant art, look up some photos, pose stocks, whatevs, and sketch those just to get some excersize going. try all sorts of different angles, wade around in it abit. Helps me out!

Take away the character designs, add words like synergy and blue sky thinking and this is the office I used to work in. The aerial perspective really helps to avoid visual confusion with all those characters and too much background would've overdone it. Great page and I love the facial expressions - last panel gives a punchline like contrast.

Absolutely splendid! So many characters... so well done...! *applause!* Dialogue is wonderful too... You do have a small grammar issue in top panel: "I don't why the hell..." should be "I don't know why the hell..." -- I like when people point them out in my stuff...!

7! More of this type of thing!

There are so many different character designs in panel 4! It must have taken some time to draw them all. It would be very interesting to see how much your style has evolved if you went back to pen/paper for the initial sketches. I could be glorious.