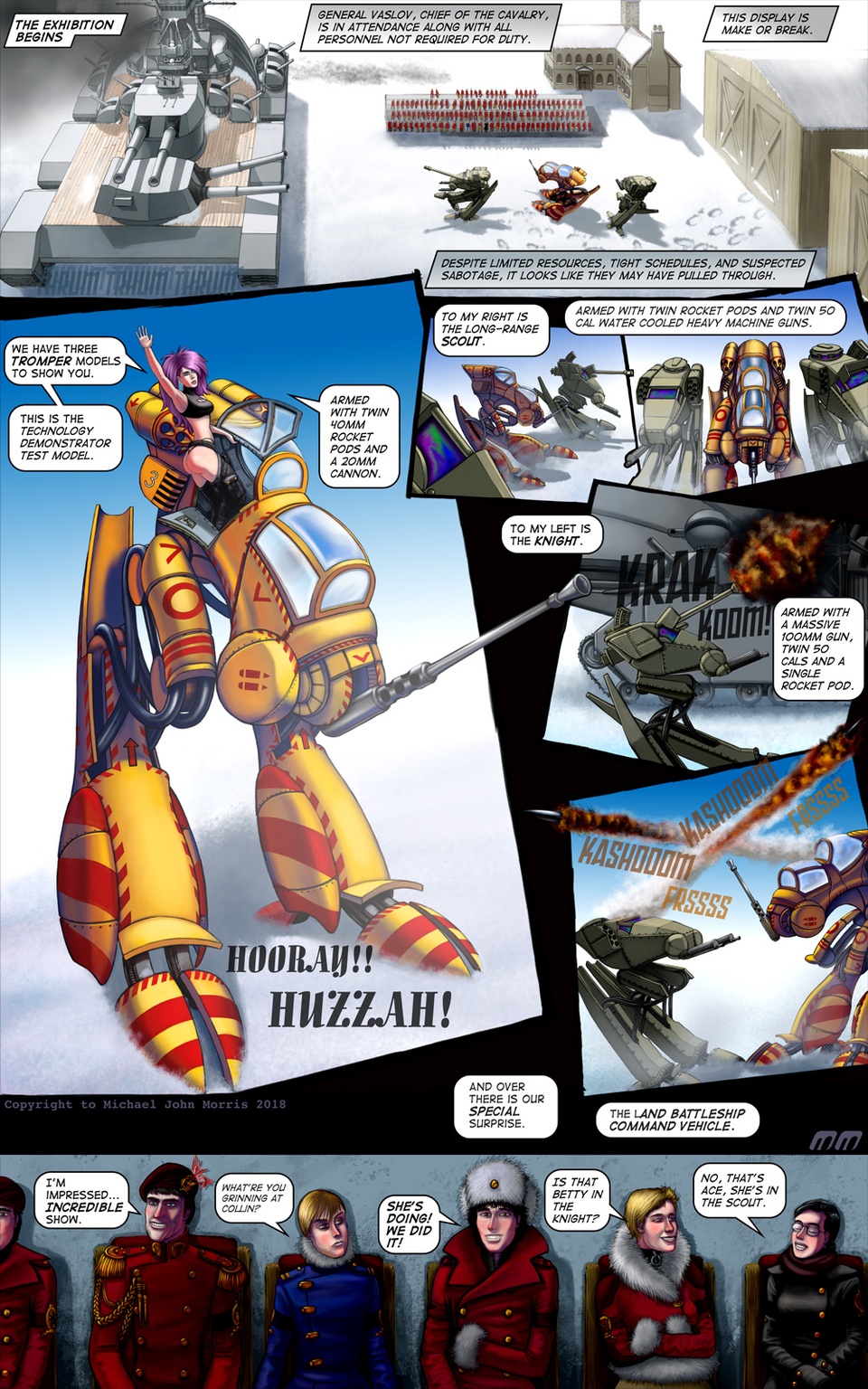 Page description:
This is the big exhibition they've been working towards. The trompers are finally working and everyone can see :)

Commentary:
This didn't take too long to draw but I was SO SLOW to colour it on my tablet. In the future I think I'll go back to using my Cintiq for that stuff.

It's really not a good idea to try and tell a story this slowly. It just takes too long to even remember what story I was trying to tell XD

It's nice to see Pinky in a more, well, Pinkyesque outfit. ;) She looks great. :) Awesome artwork. I doubt if the land battleship or indeed the Trompers would work in R/L, but they do look awesome, cool and fun.

Thanks man! I like to go back to her classic look :)

Stunning colors! Really. That's a great technique! And I love your mecha design. Go to the PatchTogether site, launch a miniature campaign and make everyone on DD follwing Pinky to vote for your design there. You can launch a miniature (statue or action figure) easily there. And the best thing, you receive 60% of the revenue. (Yeah, go back to Cintiq and avoid a horrible pain in your hands using a yokel tablet XD)

I heard that site Patch Together is now working only for big companies now... BUT, you know, there is always a 3D print to test your mecha designs :) (or sell them by DD. Who knows? People say about selling out and stuff, I say that merchandise can keep you in the industry without being a party time artist :D)

Thanks for the miniature idea! I will have to try that/ I'd love to have figures of my mecha ^_^

Your coloring is really top-notch these days. Damn. Beautiful. I know what you mean about losing track of your stories when you take too long to tell them! Lately I try to at least write an outline in advance so the ideas don't scatter in the wind.

Thanks man! And that's a good idea about the outline.

Pinky looks sexy on that mech ;)

Thanks man! I was hopeful she would

Yeah https://4-h.org. Some members show off livestock they've raised, plants they've grown, animals they've trained or other skills and knowledge. I once had to give a speech at the state fair which was rather unnerving, but I got first place. Whew!

Interesting! I had a look at the site. :D

yep, that is definitely an exhibition. so why are the vehicles there? XD

Is that some sort of agricultural thing?

And Pinky's trade mark pants to seal the deal.

You've been updating at a record pace lately :-)

Very nice!! Such attention to detail!! How vulnerable are those hose-things in the mecha-legs?

The legs are pretty tough, but none of them are meant to go toe to toe against other armour. They're mainly just for anti infantry, scouting, and surprise attacks from areas inaccessible to wheeled or tracked vehicles, feather than classic mecha battles (haha, though that's what I depict in my comic 😁).

Great page! I don't know if you've answered this before, but do you build 3D models for the trompers as an underlay?

I tried once many years ago... But found that they didn't fit well on 3D because they're totally fudged ( impossible angles and such) haha! And it was really hard to translate to reality. I may try again one day.