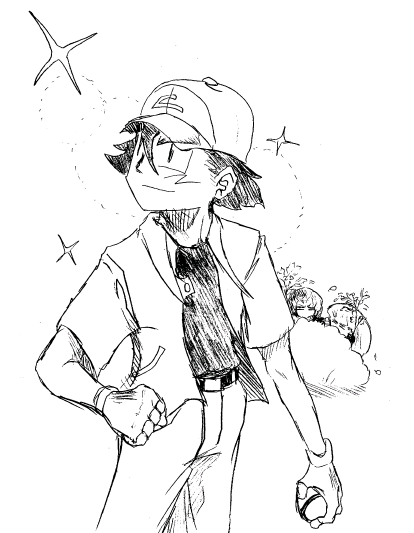 As Unrelenting as Team Rocket Themselves

So much for the “hopefully not three weeks without an update” that I said last time. What was that? Four to five months ago? Damn, I'm on a ROLL here.

Short story: I'm not done yet.

Now, if you're interested in the slightly longer one;

At present, I'm really busy with another project. REALLY busy. Every moment of my spare time that I don't spend studying (and there's a lot of that, trust me. There SHOULD be, in any case, if I don't slack off) I spend on this project. Not telling you what it is yet, though I can tell you it's not DrunkDuck or otherwise comic related. And it might be as much as a year before I even have anything concrete to show of it.

When I started Pinnacle, I knew that I most likely wouldn't go through with it all the way to the end. That's something I was prepared for. This isn't it, though - there's still A LOT I want to do with this insane piece of sketchy madness. Team Rocket hasn't even showed up yet (which is a bit shocking, since in the anime they've been steadily going after Pikachu for what, ten years?) Also, I'd really dislike to leave the Ghost of Christmas Past's warning hanging there. *ominous*

So, to stop beating around the bush, I have very little time to do the comic, and to top it all off I'm looking at making one of the most boring chapters for me so far (city backgrounds - blah) - but I WILL continue. Rest assured this comic will stretch at least as far as Ash beating Brock.

Pinnacle isn't dead. Yet. I'll grind this chapter down piece by piece until I find myself in the sunny, uncharted regions of inspired insanity beyond. You shouldn't hold your breath, though - it will probably be until summer until I have time to actually think about doing the comic regularily again.

Just wanted to make sure you know. Have thyselves a good'nd day. ;)

Okay, seriously, this comic is AMAZING! xD You need to start updating again. Like, you NEED to. Okay? YOU NEED TO!!

YAAY, you iz back!

Glad to finally see some progress here. I won't blame you for not updating. I mean some people have actual lives, so it is understandable

Superpee: Thanks, I guess. XD Either way you seem to have a real knack of commenting on my stuff like twelve seconds after I put it up. Damn, man - how do you do it?? Poki_rat: Thanks. Though being "back" might not be that accurate since I still won't update for long, long periods of time in the near future. ;D

I'm too lazy to de-fav comics, so you'll stay in my favlist for a long time. ;D