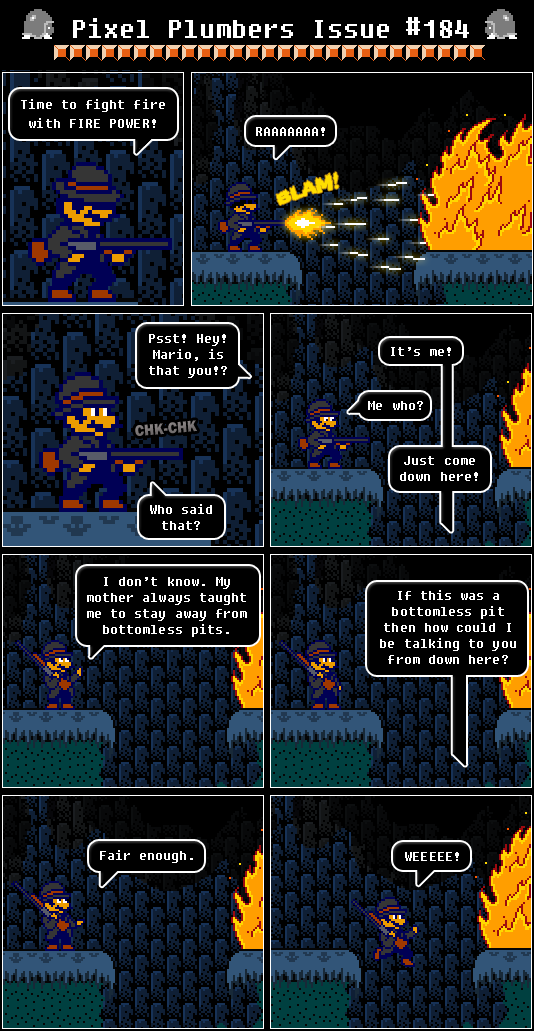 Oh man, I've been so busy complaining about THE DUCK that I almost forgot to update my comic. HA HA! Wait, where is everyone?
WHERE IS EVERYONE!?
HELLO? IS THERE ANYBODY OUT THERE?
HELLLLLLLOOOOOOOOOOOOOOOOOO!!!???

And the joke is that Smackjeeves was entirely inferior to DrunkDuck before "The Duck" came about.

Smackjeeves is so much better than drunkduck it's not funny

HOW PIXEL PLUMBERS ENDED: *mario, bleeding and dying walks back to world 1-1 and lies down, the first goomba in the game sits beside him. Mario closes his eyes, and dies* M A R I O

Hey guys I just got here what's going on

Holy shit, The Duck actually put ads for PLUMBERS on my comic.

(sigh) i have missed so much greatness since i've been gone....

Don't do it, Mario! IT'S A TALKING BOTTOMLESS PIT! D:

NO MARIO ITS A TRICK! D:

It's a trap! There was a shyguy behind the fire!

My mom always said that to me too. But not really. But still. Also if Super Bottomless Pit Jumper 64 was an actual N64 game I would totally play it.