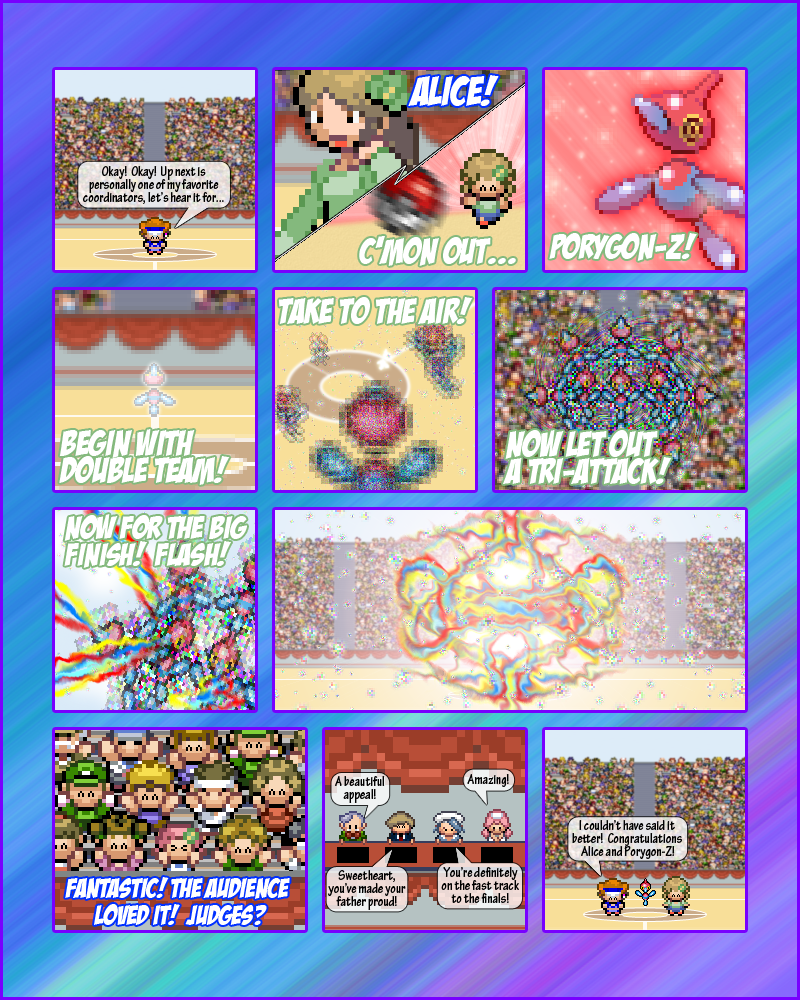 Oh Nurse Joy, you're comments are lacking, I might have to replace you with someone better~

I really like how this page came out. Originally it was suppose to be Porygon2 but I thought that the appeal would look much better if it was a Porygon-Z! But that's 2 appeals down! Up next is a usual montage page, then after will be May's appeal! These appeals have been quite easy for some reason though. Usually I am hitting my head into a wall trying to think of new and original things.

Expect the next page on Friday thanks to my work schedule being crazy this week!

CQOTD - What would you rate this appeal and why?

Tell me what you think?
Thanks and Enjoy!
~FuzzyMuzzy

No, Petah Will see him in 5 months.

Sorry I've been MIA, last week was the most stressful week ever. Pages are being worked on as we speak though!

Dear Mr. Silph: YOU, SIR, ARE BIASED. Also, Wallace is the leader of the Dark Stars.

Sorry to say the next page is probably gonna be out Saturday. My sleep schedule has really gotten messed up from the past 2 overnights of work.

The double team is the coolest part I think. 9/10

It's the japanese seizure all over again. Please don't take this the wrong way. I'll give Alice a 7/10.

9/10, the effects are outstanding

sorry fuzzy muzzy i just thought of a bunch of pokemon comics i like. also your comics really good sorry i didnt add you into my speech thingy

@AKTP - LOL I KNOW RIGHT?! I WAS EXPECTING SO MUCH MORE!

The appeal is visually appealing, though its not as creative as some of the past ones. Basically nice looks, but not new in the books. Thats my answer to the question

I love this page!

@shadowbro - OUCH! You advertise on my comic, yet fail to mention it at all in the comment at all! That really hurts D:

hey everyone ive created a pokemon comic its called Pokemon Ultimate Journey I update when ever possible you might not like the comic I think its preatty bad but im still haveing a go I dont expect it to be anything like pokemon granite, paradise, rivalry, random kanto also i plan to update every day if i dont sorry

Great page. This appeal was rather interesting. Very different from other ones. Good job. I would rate it a 7/10.