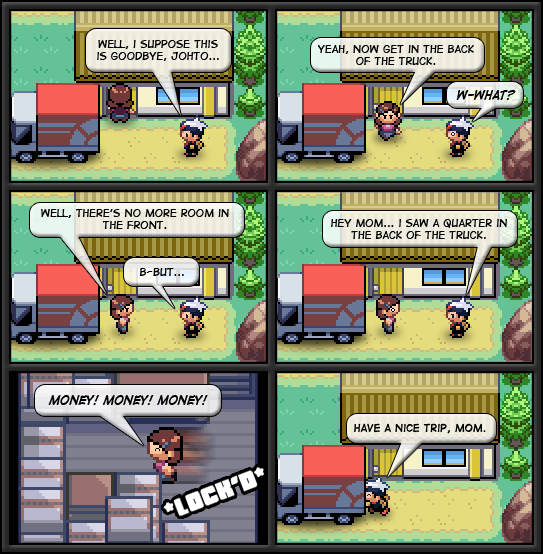 This is my first comic ever. I've been reading a few comics around and they've really inspired me to do this. I'm not sure what the update shedule will be, but for now, I'll just be doing it as much as I can; but the pages take me a while to make.

I would also appreciate it if you could show me any sheets for Hoenn region Pokemon, PMD sprites. That aren't on tSR.

Comments and Criticism would be appreciated. :D

cant wait for the next one faved

[quote=Toby]Template=Like Dash's old one, Without the logo, Charicter page, and Navi icons..[/quote] But I made Dash's template, not Dash D= And all it pretty much was was a webpage with DD's tags thrown on it ;O It wouldn't be that hard to mimic. D: (You get what you pay for, ya know D:) And I doubt Dash is that full of himself to make, yet another, split personality D:

I shall Fave! Nice work!

@Superpee: Yes, who else started there, couldn't tell you. ; D I'm pretty sure brendan actually lived on a route just outside Mahogany Town, but they didn't have a revamp for it, and this was the bit of all the maps that worked the best. @Sessy: I wish I was Dash. :3 I also wish I drew my avy, it's off a Pokeymans card. @Everyone: Thanks for reading and your support. : D

Best debut from a sprite comic ever! ;3

So we're following the adventures of the hero's mom, eh? XD Hopefully, your hero won't get a clichÃÂ© starter, like Bulbasaur, Charmander, Squirtle, Chikorita, Cyndaquil, Totodile etc. I've heard some peeps don't like those Pokemon as starters. Looks like they're in Azalea town. Hmm, who else started there? XP Just kidding. Anyway, I like it so far, I'll keep an eye on it. ;)

I can't find anything wrong, this is really great for your first comic. Fav'd. :D

Wow 1st update and I already think it's good nice spin throwing the mom in the back of the truck. I hope to see more in the future