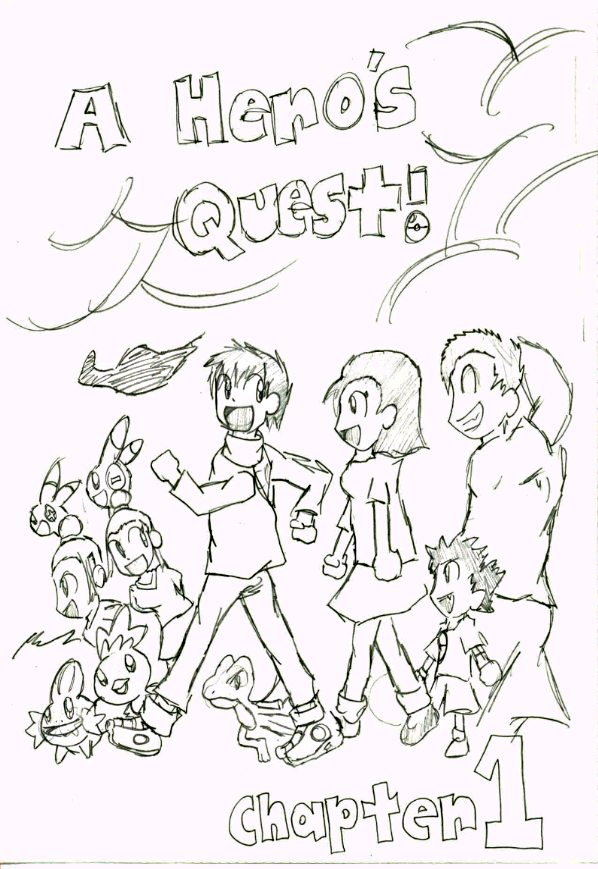 Here's the main cast on the chapter 1 cover. Kaito, Tai, Kaito's two little sisters (twins) Holly, and Haley, Celia, and Eduardo. Torchic is Kaito's, Mudkip is Eds, and Treecko is Celia's. I know it's clich but there'll be a special way they receive their pokemon so it won't be to cliche. Holly's pokemon is Pluse, and Haley's is a Minun. Sorry for him, he'll be the only main character not to receive a pokemon yt. I'm taking suggestions for what his pokemon should be. I'm thinking Poochyena, but you guys can pick. 5 imaginary bucks for whoever can guess the legendary in the background. This was sorta rushed, so sorry! I remembered to ink it this time thank goodness! And I can't wait to have the first battle which will pop up towards the end of the chapter, so you'll have to wait to see my fighting skills.

I don't have a tablet.

Ne, y'a know not everyone IS fortunate to get Photoshop or tablets. Saying to someone who has an average of 5 rating meaning the way his story is build up is pretty good, even if it is sketchy he said it himself he doesn't mind that. (And plus maybe Kaito kun doesn't want Japanese names?)

[quote=Kaito kun]Plus your drawing isn't all that better.[/quote] Whoa no need to insult me to make yourself feel better I'm just givin' a little advice. and my drawings are actually pretty good but the ones I do on FLINT CREEK are paint drawn and inked in photoshop.

Plus your drawing isn't all that better.

[quote=kaito kun]I've been drawing for a looooonnnnggggg time, but I'm just throwing in sketches here.[/quote] This isn't really all that good. unless this was done in under a minute(I really doubt it though)

I've been drawing for a looooonnnnggggg time, but I'm just throwing in sketches here. Delibug: It's Latias.

You're drawings are a tad sketchy(did you just learn how to draw cuz' that's how it looks.) and I'm not quite sure how to put this it looks okay but you're people do need a little work and the names sound like they're made up off the top of you're head and they're trying to sound japanese( they just don't sound good) oh and after you ink it you have to ERASE IT!

Great cover. (The Pokemon in the back is Latios or Latias.)

awwww everyone is so happy!

Like any suggestions for the drawing of Tai? If so, thenyes, make him slightly bigger since the rest of the people look about 14, he can't be that small..

Tai is my little brother, the short boy in the middle of Celia (the girl), and Ed (The big boy).

Any suggestions? (For Tai).

Oh, forgot to post, but I'm faving this! It isn't the best art but I like the style.

When I said hm I meant Taison.