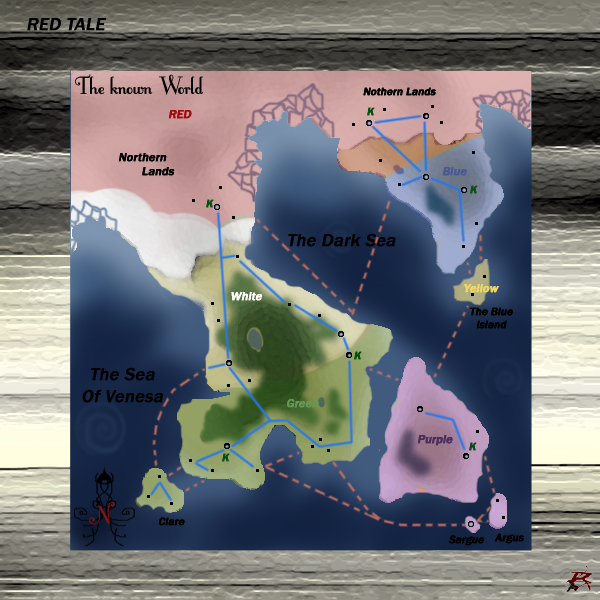 This is the full map of the ‘known world’ in RT.
There're three major kingdoms (white, blue & green), The red empire, and a smaller kingdom (Yellow).
The little ‘K’ indicates one of Kay's fortresses (The white land is the only one Kay has no power over. That's the only land werewolfs and vampires are truly grouping in without being bothered too much, Because the queen is part vampire).
The black points filled with blue are big cities and the blank ones are smaller cities or towns. (villages are not marked in the map).
The pink lines are sea trading ways and the blue ones are the main land trading ways.
Note: All land roads go around the big forest because it's too dangerous to pass through. There's only one road really going through it, and that only cause it's on a clearer part.

When there's a big change in the map I'll update it.

A really really great comic! I will most certainly keep my eye on this!

and i agree with seroph...

are you going to keep drawing this comic?

Merow. I like your animation style a lot. 'Cept the whole arm getting cut off thing... that was kinda wierd looking. N/R