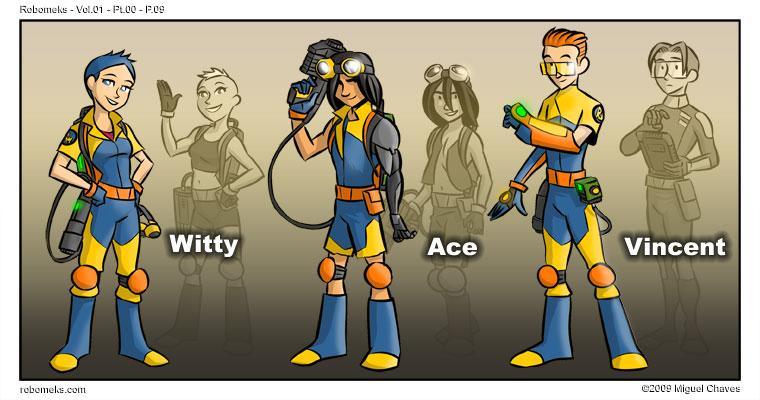 Robomeks is a sci-fi action series featuring love triangles, broken robots and EMP rays. It's out every Monday, Wednesday and Friday.

The three main characters are the employees of a start-up company (called Robomeks) specialized on the repair of robots. They are:

The story you're about to read belongs to the Volume 01 of the series but it's not the first one. Let me explain.

- ONCE UPON A TIME… a wall of text was created -

Robomeks was first published at robomeks.com, my main site, on October 2008. Before getting to the point of the story published here in Drunk Duck I published 80 pages there that explain the origins of the characters and the seed of the conflict that will be fully developed later. 75 of those pages were divided in three chapters, which all together make Volume 00. The remaining 5 pages are a prologue to the actual volume that explains the transition from the “old” Robomeks to the “new” one. But, wait, Volume “00”? Odd numbering, isn't it? There's a reason for that, though.

For several reasons, I decided to make a “soft reset” of the series back in February 2009. That reset affected several aspects. The most obvious ones were the change of page format (now horizontal when it was the usual vertical comic-book one) and the look of the characters. Other things were tweaked, changed or added in the process, like the new tools they use and the global tone of the series. The story told back in Volume 00 wasn't scrapped, though. What happened just happened. But there was one thing I wanted to focus on in the new volume, and it was to make it easy for new readers to catch up and enjoy the series without having to read the previously published pages.

So, if you feel like you're jumping in the middle of something that has started already, don't worry. I'm explaining everything again and, while the past story still counts, you don't need to read the previous story to understand what's going on here.

Anyway, if you'd still like to know where Robomeks comes from I invite you to read their origins following the links below (which direct to Robomeks main site):

- Volume 00 - Chapter 1 - “A huge demolition robot has gone out of control and Robomeks are hired to stop it and fix it. A daunting task for any robot mechanic, particularly if this is your first assignment as a start-up company.”
- Volume 00 - Chapter 2 - “A mysterious client assigns Robomeks the construction of a custom robot. A robot that will use an illegal photonic brain.”
- Volume 00 - Chapter 3 - “Robomeks are invited to the birthday party of the Shape Foundation director, Diogenes Shape. What was supposed to be a pleasant evening ends in a total mayhem when a particularly dangerous robot goes out of control.”

You can also just read the detailed summaries of all those chapters and parts here, if you're in a hurry or just don't want to spend time digging the archives.

While my main focus is the Robomeks site I'm trying to keep the Drunk Duck version as up to date as possible, but with a lag in the publishing schedule of one day or so. That means that if you want to read the absolutely latest page of Robomeks you'll find it at robomeks.com. I opted for Drunk Duck as a kind of mirror/back up site, in case something goes wrong with the main one or my pocket definitely dries up and, to be honest, I'm glad I did. The community here has been extremely helpful and encouraging so far.

That's all. I hope you enjoy the series!

Not that weird. In fact, I take that as a compliment. Thanks :)

Good cover. The art here reminds me a bit of Kim Possible, weird as that may sound!