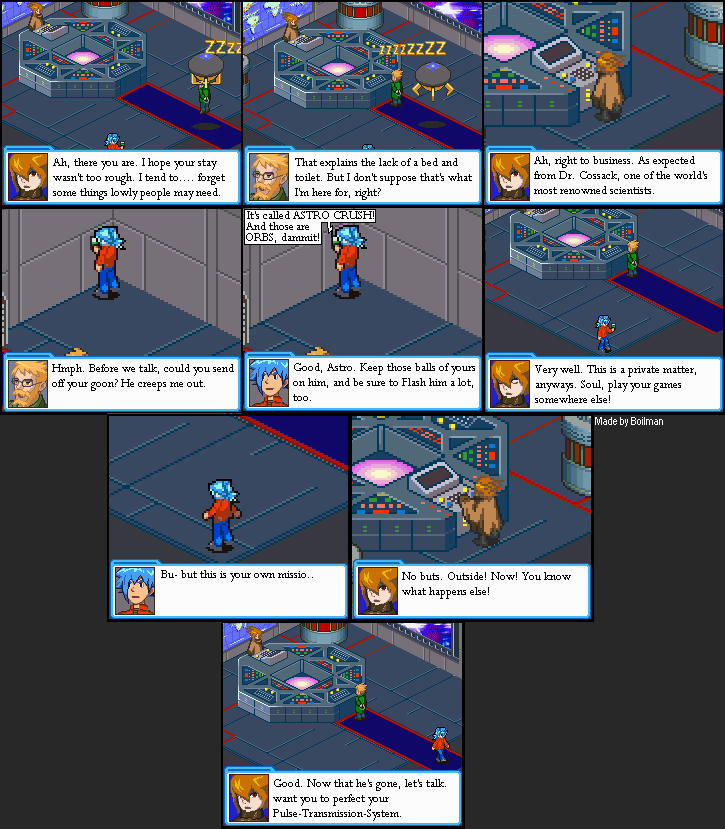 Sorry it took so long people. My school work has been interfering with my online-time, and having purchased The Orange Box doesn't help too much, either.

Anyway, here's a bit more backstory for the mastermind behind the scenes. But what can he plan with the Pulse Transmission System?


A note for anyone who never played BN3: The Pulse Transmission System (which I'll call PTS from now on) is a system in which brain waves of humans are digitalized, and then send to the net. This allows for humans to walk around on the internet with their Navi's, and even merge with them.
However, it was canceled because it was deemed to dangerous. And harm upon you on the Net, would carry over to your real body. Including Deletion.

It was a joke.

Ignore that. Going to Sweden for 3 weeks. Next update right after then.

Protip: insults don't make me update faster. In fact, updating this was what I was thinking going here, but seeing this, i think I'll wait until tomorrow. Or two days... As for me not updating, well... school's been tough. Besides that, I also flunked the year, which is the second time now. So I'm feeling not too happy. But my main problem was laziness/procrastination. So I'll try and keep this comic scheduled from now on, in an attempt to keep myself from going that route again.

Ah, I missed a couple updates, but I admit, you are improving! ^_^

Oh yeah. I also use a new font now. Is it easier to read?

I never knew that PTS but I used the same concept in my comic too. And nice adding some background info!

Heh heh, sounds like Rock's having fun with AStro