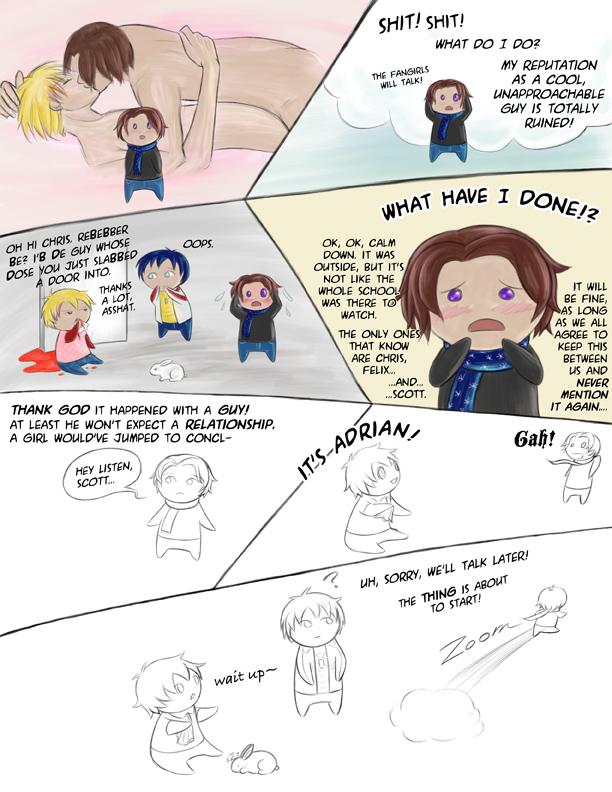 The reason I gave Adrian amnesia in the first place was that I didn't want him to act like having sex with Scotty was no big deal, (I mean the whole point of this comic is to build it up, right?) but I couldn't think of a reason for him to suddenly freak out of the blue the second he'd pulled out : P

So, yeah. I thought it would be fitting with Adrian's personality to be more concerned with how this is going to affect his popularity, rather than the fact that his partner was a man. Or rather, among our many guesses on Adrian's personality, I think this is the funniest one : D

Besides they liked each other as kids, right? Since Scotty's been all starry-eyed since they met up again, I'm thinking it was Adrian in the past who took the lead. (What, I'm expecting at least a kiss or an overly awkward hug or a misunderstood “I like you”, this is romance!) *ahum* So I guess Adrian would be used to his attraction to Scotty's type, but also used to repressing it (for the sake of his image, maybe?) while Scotty himself seemed to have forgotten about it (or the sudden rush of feelings wouldn't be surprising him like that).

Aaaanyway, this is just my take on the characters, but I figured at this point we had to start showing what their thoughts or feelings are, otherwise it's gonna be really hard to keep thinking of random situations to throw them in.

Sorry, I couldn't finish coloring the page in time, but I will go back and color it as soon as I get the chance.