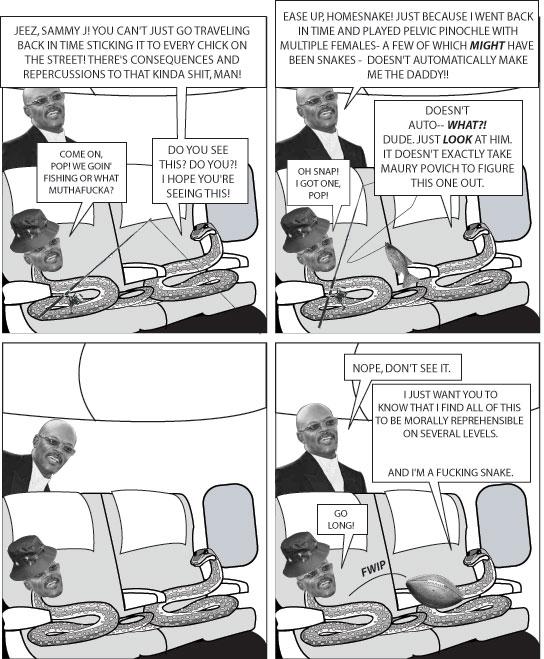 i love this comic chez

Holy shit,i've never seen so many comics on one page hooly crap

This is the greatest thing I have EVER read. Srsly.

Hey. This comic is over. I'm commenting on it! Ha-HA!

this must be the most commented comic EVER

Did your avatar always have red eyes or is that new?

wait, so they logged in to mute the spam, but not to update. Poopy heads.

How come no one says anything to the guy that writes this?

Nah it was a soap for a movie, and the movie came out, cant expect updates foreva especialy since the joke is good. Like he said "legend shall never die" keep it real brotha ha ha ha, and its *still* great.

That is a pretty weird thought....unless they came back from the dead to update. But it seems living or dead this comic ain't goin no wheres.

This is sort of a weird idea...but what if the author died? Literally? Like in a car accident...no one else would have known his password so they couldn't get on his DD account and announce it...just a thought...

THE LEGEND SHALL NEVER DIE

I agree. And you know what? Probably this comic was created to fill movie's viewer's gauge.

y'know what, this comic has been great, but it's time to pass the buck. I say we begin givin it some smaller scores to reduce its favoritage

y'know what, this comic has been great, but it's time to pass the buck. I say we begin givin it some smaller scores to reduce its favoritage

Looking at this past 4 months of comments on this single page, you know what I see? A great comic just dieing, fans acting like fools,some even futily hoping for an update. Listen, I can be pretty damn lazy sometimes, and the longest I've gone without updating is less than a month. He hasn't updated in 4. Face it, it's never updating again, unless he posts one in pure spite of this. So quit being his fanboy, and show him how much his popularity drops when he thinks he can coast by. Seriously, I am never visiting this comic again. I urge you all to do the same.

Yet it will never die in my heart. I will always wait for an update. Even if I die long before it does.